There are 10 new Omicron cases today - part of 25 Covid-19 cases reported in the community by the Ministry of Health.

The new cases bring the total number of Omicron infections in the cluster to 29.

And ten people are in hospital with the virus.

Of today's new Omicron cases, six are in Auckland and were linked, directly or indirectly, to a family event and other associated events in Auckland on the weekend of January 15 and 16.

There was also two Omicron cases in Tauranga. Both cases were in the same household and are isolating at home. Case investigations are ongoing but, at this stage, there are a limited number of exposure events associated with these cases.

There was also one new Omicron case in Nelson/Tasman, who was a household contact of a previously reported case and was already isolating when they tested positive.

There was also a new Omicron case in Palmerston North that is a household contact of a previously reported case and was also already isolating when they tested positive.

The ministry said it wanted to thank the Nelson-Tasman family associated with this cluster for coming forward and getting tested when they became symptomatic.

"Their cooperation has been instrumental in identifying locations of interests, additional contacts, and cases, all of which helps slow the spread of Omicron in our communities."

At this stage, it was believed the family became infected while in Auckland, not in the Nelson-Tasman region.

The ministry confirmed a case from the January Omicron cluster attended a second private event in Auckland during their infectious period. The exposure occurred on the evening of January 16 at the Pukekohe Indian Hall in Auckland where a wedding was held.

Anyone at this location at the relevant times is asked to get tested immediately, and self-isolate until a negative result has been returned.

The number of cases and contacts was expected to grow, health authorities said in a statement, given the highly transmissible nature of Omicron and as officials learned more from case interviews.

It comes as two Auckland weddings are now the focus of the Omicron community outbreak as new exposure sites across the city emerge including a bottle shop, a bakery and bus routes.

Meanwhile three bus rides in Auckland have now been officially linked to people with Omicron.

At least one person with the highly transmissible variant travelled on bus 195 New Lynn to Vulcan Lane, in the city centre (Stop 7049) on Monday, January 17. The affected time is between 8.45am and 9.15am. 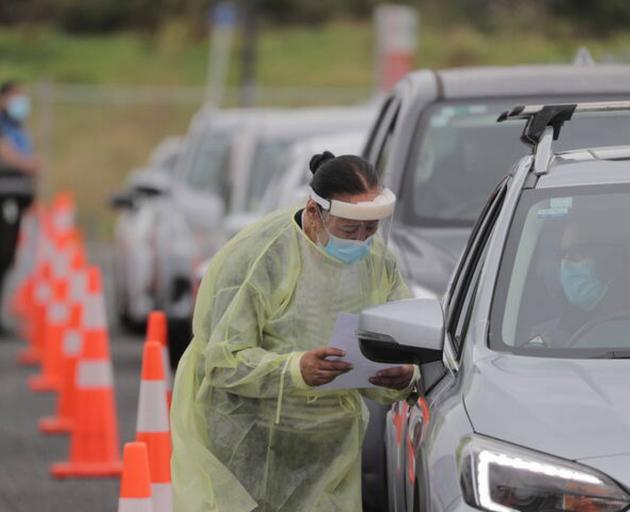 Westgate, Auckland drive-through vaccination centre. Photo: NZ Herald
The Pukekohe Indian Hall, the venue for the second wedding, is listed on the Ministry of Health website as a location of interest linked to Omicron - and is also a pop up community testing station.

The Ministry of Health has confirmed a person with Omicron visited the Pukekohe Indian Hall on January 16 between 6.45pm and 10.45pm.

On the Auckland Regional Public Health Service (ARPHS) website, the south Auckland hall is registered as a drive through/ walk in testing centre for Covid-19.

A Pukekohe Indian Hall spokesperson told the Herald the Omicron exposure had not impacted the venue in any way as it was cleaned after each event.

The new locations come as Cabinet meets to discuss how the looming outbreak will be managed within the traffic light framework.

Yesterday, there were 25 new cases in the community and the Omicron cluster grew to 19.

There were 50 new cases of Covid-19 detected at the border.

This follows an amusement park, a community hall, a funeral and a restaurant being identified as locations of interest connected to the nine Motueka cases with the Omicron variant who attended a wedding in Auckland.

A second wedding that took place at the weekend is believed to have had up to 500 guests.

Yesterday, health officials said the number of cases and contacts were expected to grow given the highly transmissible nature of Omicron and as more was gleaned from case interviews.

Modelling suggests that New Zealand could see anywhere between 5000 and 50,000 cases a day of the highly transmissible variant. Despite this, Minister of Health Andrew Little said yesterday he was confident the health system could cope.

Furthermore, regarding the number of potential cases, Covid Response Minister Chris Hipkins yesterday told Newstalk ZB's Tim Dower that a lot of people who will get the variant will be able to stay home while they fight the virus off.

Health officials continue to search for how Omicron got into the community.

The connection between the nine Motueka cases and the border is not yet known - leading health officials to believe the highly transmissible variant was circulating in Auckland and potentially in the Nelson region.

Meanwhile, urgent whole-genome sequencing - used to identify and link the genetic fingerprint of individual infections, and confirm variants like Omicron - will now be prioritised for any unlinked community cases and those involving border-related workers.

The new approach would help to detect any cases of Omicron as quickly as possible, establish any links to existing cases, and slow the spread of the virus.

Tomorrow, an announcement is expected to be made from Cabinet following discussions on a new plan within the traffic light system.