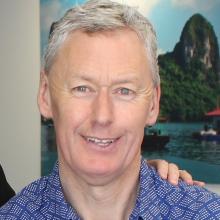 Tony Laker.
The Southland community is mourning the loss of one of its most passionate and prominent businessmen.

Husband and best friend of Tracey Laker and father of Meg and Flynn, Mr Laker was a born-and-bred Bluff boy who was extremely proud of his Southland roots.

His keynote speaker profile said he was the son of a fisherman who enjoyed a "true red and white Bluffie upbringing".

After graduating from Cargill High School, he started his business career working for Trust Bank Southland.

In 1999, he and Mrs Laker decided to open their own travel agency in Invercargill despite the advice of travel industry experts, who warned them it was a terrible idea.

However, against all odds, House of Travel Lakers quickly became one of the largest travel companies in New Zealand, winning several awards.

In 2019, it was voted the best large House Of Travel office in New Zealand and it also won the award for the best retail travel agency in New Zealand, from more than 400 offices, at the National Travel Industry Awards.

Mr Laker also received a lifetime achievement award at that time, one of only six, which recognised an individual for their outstanding leadership and contribution to the New Zealand travel industry.

Last year, after 22 years, he and Mrs Laker decided to leave the business to spend more time with their family.

Mr Laker also became a highly regarded speaker in many events throughout the country.

Radio host and friend Jamie MacKay said they met through work when Mr Laker was an Air New Zealand representative and had organised rugby trips for Hokonui Radio’s commentary team.

They became close friends due to their common passion for rugby as he used to travel with the radio station’s group to watch the Southland team, he said.

After a few trips across the Tasman for All Blacks tests and rock concerts in the late 1990s, the duo decided then to join forces to promote "farming and footy" tours across the world.

Mr Laker was a "self-made" man who was proud of his humble upbringing, Mr MacKay said.

The thing he would remember the most was his "overwhelming" positivity.

"He was always glass half-full. Actually he was glass half-full to overflowing. He was so positive and ... he carried that [positivity] from business into his battle with cancer in the last couple of years."

Southland Business Chamber chief executive Sheree Carey said Mr Laker was an outstanding businessman who was the personification of the resilience of Southland people.

"He built his own company from scratch and transformed it into one of the most respected and larger travel agencies in the country," she said.

"He was also a fantastic person and very inspiring man. He will be deeply missed by all."

Invercargill Mayor Sir Tim Shadbolt said he attended a Rotary Club meeting weeks ago at which Mr Laker was a speaker.

He remembered Mr Laker and his wife introduced charter flights from Invercargill to Melbourne in 2015 to give Southlanders a Melbourne Cup experience.

"He was a real innovator. He introduced the charter flights to Melbourne Cup when no-one else was even thinking of doing it."

Sir Tim said Mr Laker was prominent in the community and a supporter of many charities.

"He served his community with passion and loyalty," he said.

Mr Laker was also a keen sportsman, having played for Old Boys for more than 20 years.

Coach Scott MacKenzie was a personal friend of Mr Laker for more than 30 years.

Many people lost their connection with their clubs when they stopped playing, but Mr Laker had always been one of the team’s biggest supporters, with sponsorship, attending events and helping with fundraising.

Due to his contributions, the club’s Donald Gray team had nominated him patron for this year.

"He was just a genuine and nice guy."

A celebration of Mr Laker’s life will be held at ILT Stadium Southland at 11am on Monday.