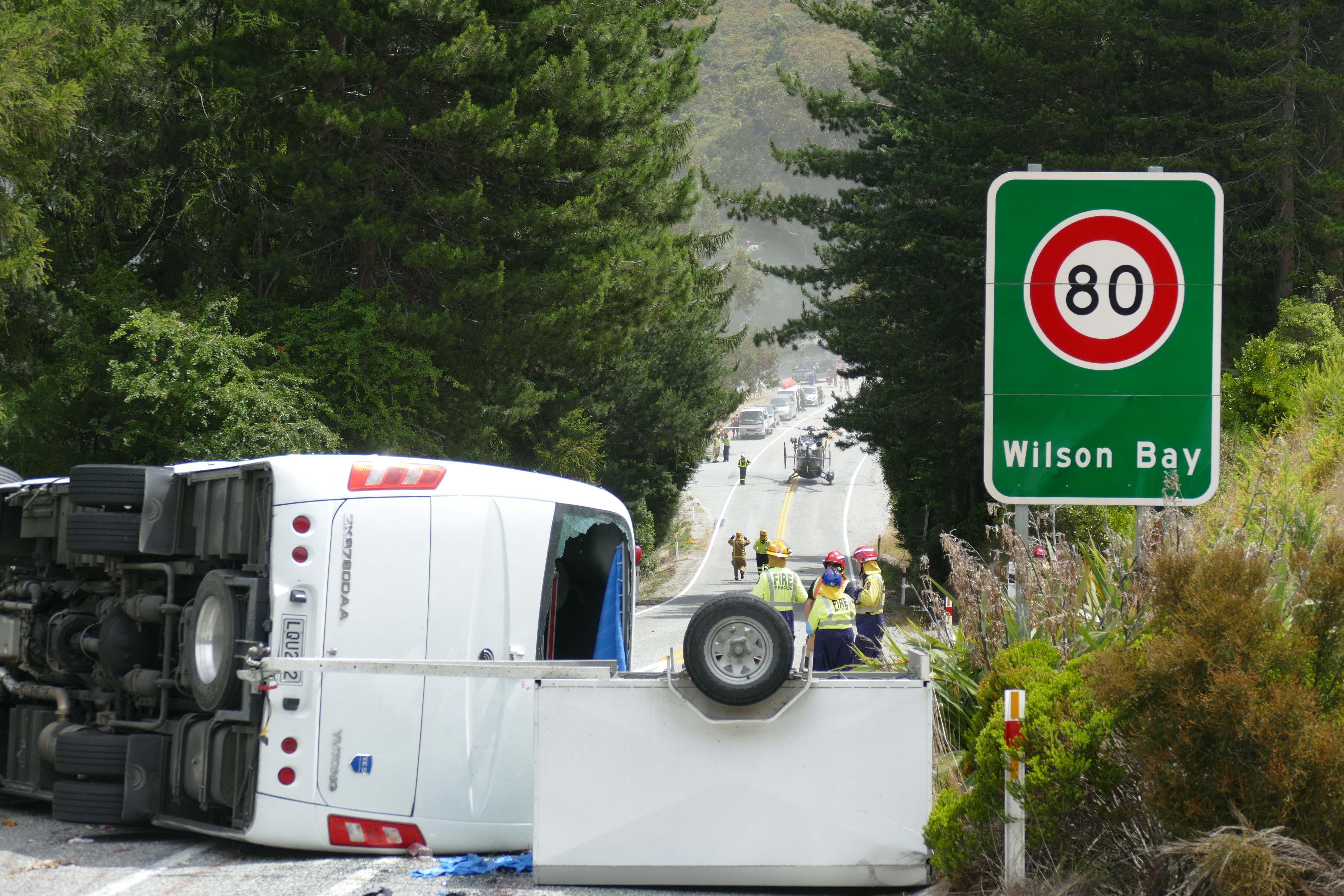 The crash happened on the Queenstown-Glenorchy Rd in January. Photo: Tracey Roxburgh
The 10-year-old girl who lost both her arms in a tour bus accident has returned to China with her family, Immigration New Zealand says.

Last Friday, a judge dismissed an appeal from the driver responsible for the crash. Chinese national Liang Fang had appealed against his sentence in the High Court at Invercargill, stating a refused discharge without a conviction could affect his visa.

Justice Rachel Dunningham acknowledged in her decision the serious consequence that a deportation would have. However, for "a single man, with family back in China", she did not see the impact of returning to his country being "as great as in some other cases".

She said Fang's carelessness in the face of the significant responsibility of driving a tour bus was relatively serious.

Fang was driving a bus and trailer operated by Awing Travel NZ Ltd carrying 23 Chinese tourists when it crashed on Wilson Bay, near Queenstown, on January 21.

The girl, who has statutory name suppression, lost both her hands while another woman lost an arm as a result of the crash on the Glenorchy-Queenstown Rd.

A source close to the family said the girl's parents found out about the driver's failed appeal through a WeChat group made up of people linked to the incident.

"The father acknowledge that he's aware, but he does not want to comment," the source said.

"The family are now back in China and they just want to move on with their lives. They want to look to the future rather than dwell on the past."

An INZ spokesman said the family departed from New Zealand for China on July 5.

"The family did not apply to INZ for residence. INZ understands a request for ministerial intervention was made," the spokesman said.

The girl's mother remembers vividly the day of the crash, on January 21. The Awing Travel NZ Ltd bus and trailer tipped to its side and skidded for about 40m after Fang lost control near Queenstown.

Twenty-three people were on board, including the driver, and 20 were treated for injuries by St John staff at Wilson Bay on the Glenorchy-Queenstown Rd.

"(My daughter) was on the ground and I rushed to her. My mind went blank when I picked her up and noticed that she didn't have her arms," the mother said.

When the New Zealand Herald visited the Auckland serviced apartment where the family was staying, the child was afraid to come out of her bedroom.

The mother said her daughter's confidence and sense of security were shattered and the once-extroverted girl was now afraid of seeing people.

"(She) loves dancing, she's won many prizes in dancing competitions, now she can't feed herself, dress herself or even clean herself after a bathroom visit," she said.

"The reparation money, I'll gladly give back every cent and fork out many times that, if (my daughter) can get her arms back."

"While INZ is empathetic to the family's situation, there is no specific pathway to residence for people who have been injured as a result of an accident while in New Zealand."

The driver Fang admitted to charges of careless driving causing injury and was sentenced in June by Judge John Strettell in the Queenstown District Court.

He was sentenced to 200 hours' community service and disqualified from driving for nine months.

The girl's father told the Herald at the time that the sentence was an insult.

"The pain and trauma that we are going through is unimaginable. It's worst for (my daughter), but the whole family - myself, my wife and even her grandparents - are living every day in pain," he said.

"I feel that New Zealand's justice system has failed us. The reparation payment adds insult to injury and the penalty faced by the driver shows there is no justice."