Police were looking for a woman who escaped MIQ security last night. She had been transferred from hospital to MIQ and was then allowed to go home to fetch personal items.

The woman handed herself in to police on Wednesday. According to a spokesperson, she has been charged with failing to comply with a Covid health order and is being returned to MIQ, transported by police in full PPE gear.

In a separate incident, two men escaped from the Holiday Inn at Auckland Airport which is being used as a quarantine facility. They were arrested shortly after.

All three people who escaped have Covid-19. 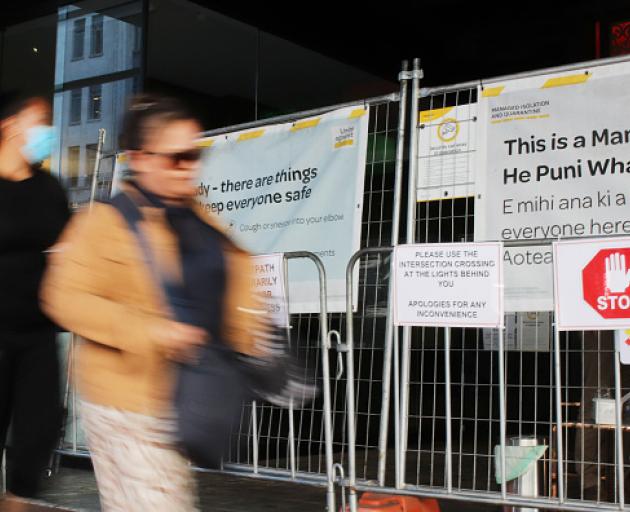 Security escorted the person back to their southeast Auckland residence so they could return home briefly to retrieve personal items, care for a pet and lock their home.

After 10 minutes, security went to get the person to find they had disappeared. Police were immediately notified and are still looking for this person.

King said the incidents were really disappointing and unacceptable.

"These facilities are not prisons and these individuals have willfully absconded. There are rules in place for every single returnee from overseas and now the positive community cases, and we expect people to follow these during their stay in managed isolation or quarantine."

Deliberate breaches like this can put the wider community at risk, she said.

Two men who escaped went to dairy to buy cigarettes

Meanwhile two men escaped from the Holiday Inn at 5.40pm on Tuesday and were arrested by police within five minutes. They were under police and MIQ security observation the entire time.

The Ministry of Health believes, based on information provided by MIQ, that there is likely to be a low risk to the public due to the short period the two cases were out of the quarantine facility.

One was on day six of their stay at the isolation facility and the other was on day seven.

A man, 26, has been charged with intentionally failing to comply with a Covid-19 Public Health Response Act. The maximum penalty is six months imprisonment and a $4000 fine.

When he appeared in Auckland District Court today, a mobile phone was handed to the judge with the defendant on speaker.

The man's lawyer said the 26-year-old defendant and another man left the Māngere Holiday Inn to purchase cigarettes and were caught a short time later at a nearby dairy.

Judge Josephine Bouchier said he could be remanded on bail once his MIQ stay ends in four days.

His bail conditions include abiding by all Covid-19 restrictions and not leaving the Holiday Inn again until given permission from the Ministry of Health.

"You will not be allowed to go out for cigarettes and you better jolly well understand that," the judge warned.

Meanwhile the Auckland District Custody Unit at Mt Eden has had to be closed for a deep clean after the 26-year-old man who escaped from the Holiday Inn was taken there last night.

A police spokesperson said to minimise the exposure to other detainees and police staff prisoners had been moved to other custodial units within Auckland.

A second man, 33, will also be summoned to appear in court at a later date. The Herald understands this person is still in the MIQ facility.

The Holiday Inn is operating as a dual managed isolation and quarantine facility. It has 168 quarantine rooms. There are currently 142 community cases staying there and 131 of those are in quarantine.

MIQ hotels have recorded more than 117 escapes, attempted escapes, or residents wandering about in off-limits areas of their hotels.

The breaches have all happened since September last year but only three were reported to the public, all of them after runaways had been found, RNZ reports.