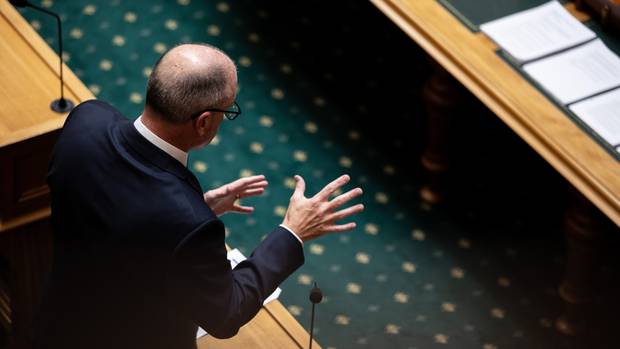 Jacinda Ardern faces of against Todd Muller for the first time during Question Time in Parliament today. Photo / Pool

Although Muller's line of questioning was not particularly fiery, an exchange between NZ First Minister Shane Jones and National's Paul Goldsmith caused a stir during question time this afternoon.

Muller – who rolled Simon Bridges to become National's leader late last week – focused on small business and jobs over the course of his line of questioning.

"What is the Treasury's most recent estimate of unemployment in the third quarter of this calendar year, and what is the Government's specific plan to arrest the sorts of job losses we've seen over the past two weeks?"

Before answering, Ardern congratulated Muller on becoming the new Opposition leader – but that's where the pleasantries ended.

In response to questions about the plan, Ardern rolled out a familiar phrase – "we've gone hard, and we've gone early" before repeating job statistics unveiled in the Budget.

Muller came at her again – "does she accept that more direct cash support to businesses will help prevent job losses".