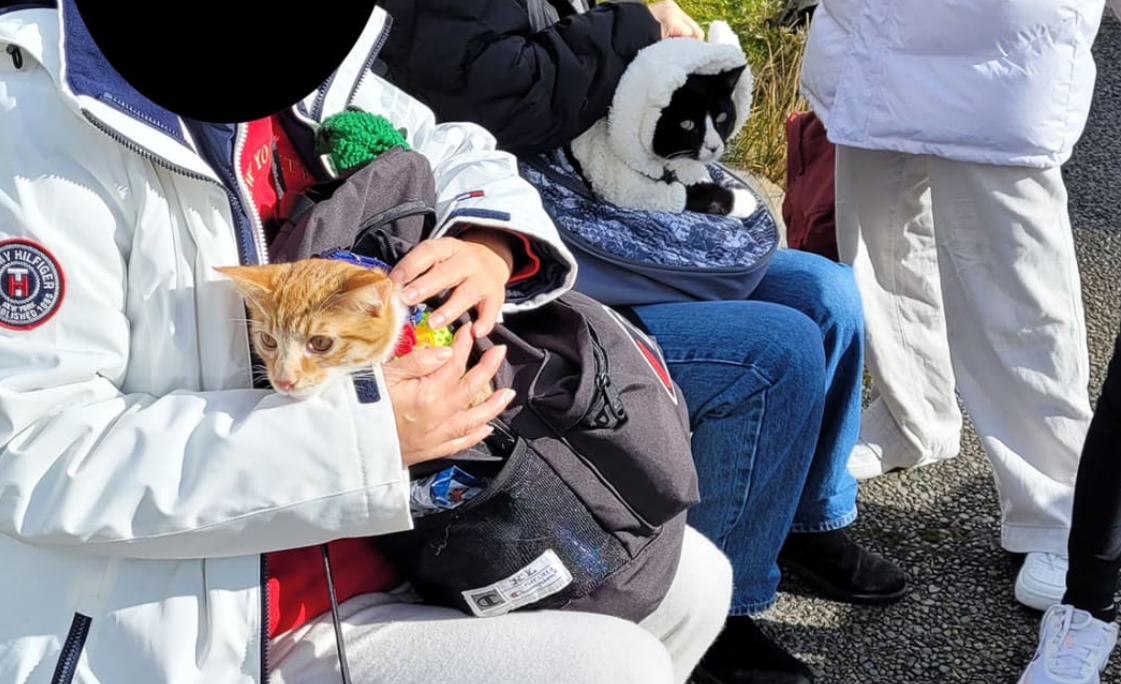 The cats were brought to Mount Taranaki and kitted out for a hike. Photo: Supplied / DOC
It may seem like a friendly outing for an animal lover, but taking a domestic moggie on a walk about in one of our national parks could have catastrophic consequences.

The Department of Conservation (DOC) says it recently pulled up some visitors to Mount Taranaki who were about to take their cats - suited up in winter-wear jackets and carried in their backpacks - into the national park.

DOC Senior Ranger Dave Rogers told RNZ's Checkpoint programme today the owners were stopped at the North Egmont carpark before taking the felines for a frolic.

"People don't realise it's actually an offence to take domestic animals into the parks," he said.

"One of our rangers at our visitors centre was informed that there were people in the carpark getting cats ready ... to take them tramping.

"They had two cats and they put coats on these cats and then they put them into backpacks and were getting ready to head off when our ranger intervened and advised them they couldn't be doing that."

Rogers said the pet owners were visitors from Auckland and said they were not aware of the rules.

Cats and all other domestic animals are not allowed in national parks as they pose a threat to endangered birds such as kiwi and whio, and other native species including geckos and insects.

"They're not the only animals we've had recently that have been brought into the park."

Rabbits and parrots have also been unwanted visitors.

"The woman wanted to carry the parrot around on her shoulder.

"Of course, dogs are our biggest issue ... continually we're dealing with dogs being brought into the park."

Most people did not intend to harm the parks, he said.

"Most of them are animal lovers - and that's the main point there. They come from all over the country and they're all different walks of life.

"They're just animal lovers who can't be apart from their animals so they take them with them."

But no matter how tame an owner thinks their pet is, they still presented a danger.

"Like any domestic animal they've still got that instilled predatory instinct in them and, of course, they can create harm for our native species."

Rogers said pets could cause real harm to fragile wildlife.

"In my time I've seen three kiwi killed from dogs around car parks, so it's a real problem."

Rabbits would eat the native vegetation, while parrots could drive the native bird species out, he said.

No pets are permitted in national parks or dog prohibited areas unless express written approval is granted.

Under the National Parks Act, owners found with pets in Egmont National Park may be issued an instant infringement fine of up to $800.

Serious or repeat offenders may face prosecution and a fine of up to $100,000 or up to a year in prison, DOC said.

A pet may also be seized and impounded if it is found in a national park or controlled area without a permit.

So how do pet owners react to being stopped at the gate from their adventure?

With unusual animals like cats or rabbits, the owners "genuinely don't realise that they can't do that," Rogers said.

"Dogs, we get some that plead innocent and didn't know, but we get others that are quite ignorant and they don't see why they can't have their dogs there.

"But for good reason, they can't be in there."