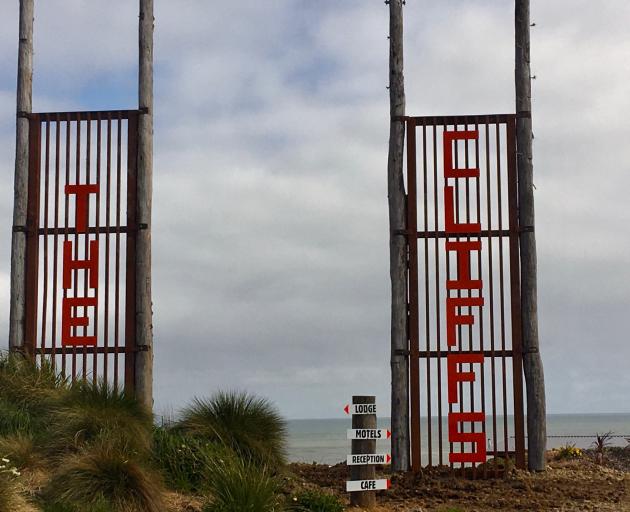 Ton Crooymans' large sign at his Tūātapere property has turned heads in the community. Photo: Supplied
The owner of a seaside lodge in rural Southland has been ordered to remove his home-made sign made out of power poles, less than 24 hours after it was erected.

But in a twist, a similar unconsented structure — also made out of power poles — has flown under the radar on the same property for 14 years.

Last week, Ton Crooymans received an email from Southland District Council informing him he would need to remove his newly-constructed sign, made out of two cattle stops and four perpendicular power poles.

The sign in question reads "The Cliffs", advertising Crooymans' 18 studio units in Tūātapere, one hour west of Invercargill.

Nearby resident Baerbi Kratzeisen confirmed to Local Democracy Reporting she alerted council of the unconsented structure, but says the matter is between them and the Crooymans'.

"We only wanted to know if he had a consent. The Southland District Council said he didn’t have a consent. They are following up on that one," Kratzeisen said.

"If for whatever strange reason they might give him a consent, we will probably go further."

Crooymans suspected he knew who the informant was because he had seen his neighbour near the sign with a camera. When he approached, they turned around and walked away, he claims. 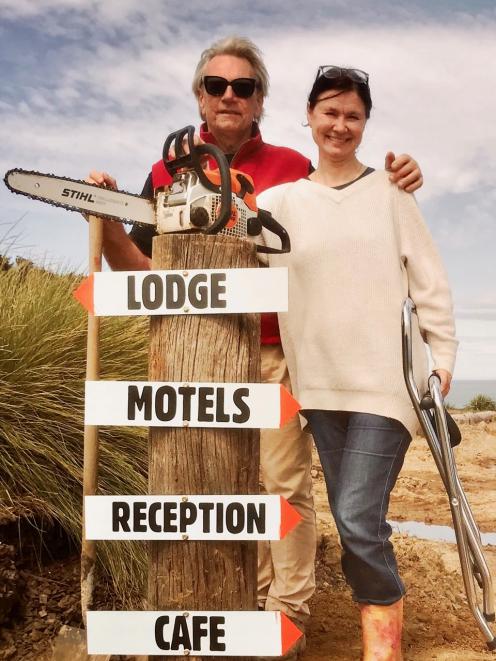 Ton and Larissa Crooymans have called Tuatapere home for about 16 years. Photo: Supplied
Within 24 hours, the council contacted him to remove the sign.

The saga has piqued the interest of community figures because Crooymans provides infrastructure which supports the region’s tourism, including accommodation near the Hump Ridge Track, which is set to become a Great Walk next year.

Now Southland Mayor Gary Tong says he might get involved, to see if a solution can be found.

"I spoke to Ton, and from the very short discussion, he understands he needs to have consent," Tong said.

“What he’s having issues around is taking the sign down while he asks for that, which is something I might be able to talk about and see if it can stay up there until such a time as a consent is issued or not."

Crooymans, who is originally from Holland, has called Tūātapere home for the past 16 years.

The property developer believed the new signage was an imaginative way of promoting his business while giving a nod to the surrounding area.

“I really like it, because it’s two power poles, all representing the farming and forestry thing here in the area.

His disappointment is shared by Southland district councillor George Harpur, who penned a letter to Tong expressing frustration.

In the letter, Harpur called for “common sense” to prevail, arguing that Crooymans had made a significant contribution to the council through his developments in the Tūātapere area.

The Crooymans’ offer accomodation near the Hump Ridge Track, which is set to become a Great Walk. Photo: Supplied
Harpur told Tong it was “interesting” that it took 36 hours to respond to the consent breach, but 36 months to formalise the original consent for the accommodation block.

“Are we really looking to promote the Western Southland region to complement the new Hump Ridge Great Walk and the southern wilderness area of Fiordland, or do we have another agenda?” Harpur asked.

Crooymans has been given until October 29 to remove the sign, which Southland District Council environmental planning manager Marcus Roy said would be likely to trigger a publicly notified consent because of its scale.

“Accordingly, I have given the land owner a fair timeframe to remove the signage,” Roy said.

Crooymans says he is happy to ask for resource consent, but wants the sign to remain in place until a decision is reached.

He says a similar unconsented structure on his property — three power poles on an angle resembling the bent-over trees at Orepuki — has been allowed to stay in place since its establishment 14 years ago.

Crooymans contacted Kratzeisen to attend an on-site meeting this morning, but the invitation was declined.

Kratzeisen says the issue is now between the Crooymans and the council.