Groundswell NZ co-founders Bryce McKenzie and Laurie Paterson on the Paterson family's Greenvale farm which is being farmed by the fourth and fifth generation. PHOTO: SHARON PATERSON
Two weeks ago, convoys of thousands of tractors and utes took part nationally in Groundswell New Zealand’s Howl of a Protest event, protesting against what the rural sector says are unworkable government regulations. At the core of the group are two southern farmers, who talk to business and rural editor Sally Rae about why they won’t go away.

They're an unlikely pair of protesters.

In fact, Laurie Paterson and Bryce McKenzie have never been involved in any sort of protest during their lengthy farming careers. Until now.

The co-founders of Groundswell NZ have ultimately been responsible for the biggest protests some towns have ever seen.

Being described as an activist took Mr McKenzie (68), a semi-retired West Otago farmer, by surprise.

"I said, ‘I’m not an activist’. They said, ‘what are you?’ I thought, ‘what am I?’ Somebody that’s concerned about what’s happening to New Zealand, that’s all I am."

As to the origins of the Groundswell juggernaut, Mr McKenzie good-naturedly blames his wife Karen.

"That was the start - it was me complaining to my wife."

She told him to stop moaning and do something about it, so he wrote a Facebook post in August last year in which he outlined how he was "struggling to understand what the politicians who make the laws are trying to do to the farmers and people of New Zealand".

"Why would we get laws that no-one can make sense of ?" he wrote.

It had more than 7000 shares and led to another wife urging her husband to act; Greenvale farmer Sharon Paterson suggested to her husband that he give Mr McKenzie a call.

The pair had met probably only several times previously. Now Mr Paterson quipped they should have a "special line put through".

And Mr McKenzie has no regrets about penning the post that kicked it all off.

"It’s a terrible thing to say [but] New Zealand was ready for it, not just farming."

He has spent all his life on the land, including about 45 years farming on his own account. His sons now farm the same land he and his father had farmed - "I’m back to being the boy; I’ve done the full circle" - and his roles now include driving a tractor, rearing calves and filling in.

He has also been involved with the award-winning Pomahaka Water Care Group, a farmer-led catchment monitoring group.

For Mr McKenzie, the day of the Howl of a Protest started with a 5.45am television interview in Gore’s main street and cameras followed him throughout the day.

Talking to co-ordinators throughout the country prior to it, he knew it was going to be big but, to actually see it, was humbling.

"I was emotional in the morning. It was really tugging at my heartstrings. I thought, ‘I’ve got to get over this. I’ve got a job to do. I need to be clear-headed in what I’m doing.

"That talk-to seemed to bring me right," Mr McKenzie said.

Despite issuing a statement prior to the event emphasising the need for respect and safety, he had still been worried it could go sour, that people could be so annoyed they would "do something stupid".

As the day wore on and it became apparent that was not going to happen, he started to relax. By the time he drove his tractor home late afternoon, he was "absolutely stuffed".

He went to a club rugby game the following day "just to get away from it - but that didn’t really achieve much because people wanted to talk".

"The number of people that have said to us it brought them to tears is amazing. It had a massive impact on people, the number of emails and texts ... I thought I was going to get some really bad ones [but there was] not one."

Some were particularly moving such as the one from a sixth-generation farmer who spoke of how he and his wife had been in the throes of selling their farm.

"Today, I’m going to be a farmer and my kids are," he wrote.

Asked what he would say to those who were critical of the protests, or suggested that farmers were whingers, Mr McKenzie said people were "going through real pain".

"This isn’t imagined. If you don’t know about it, we’d like you to try and find out. It’s general — people are hurting." 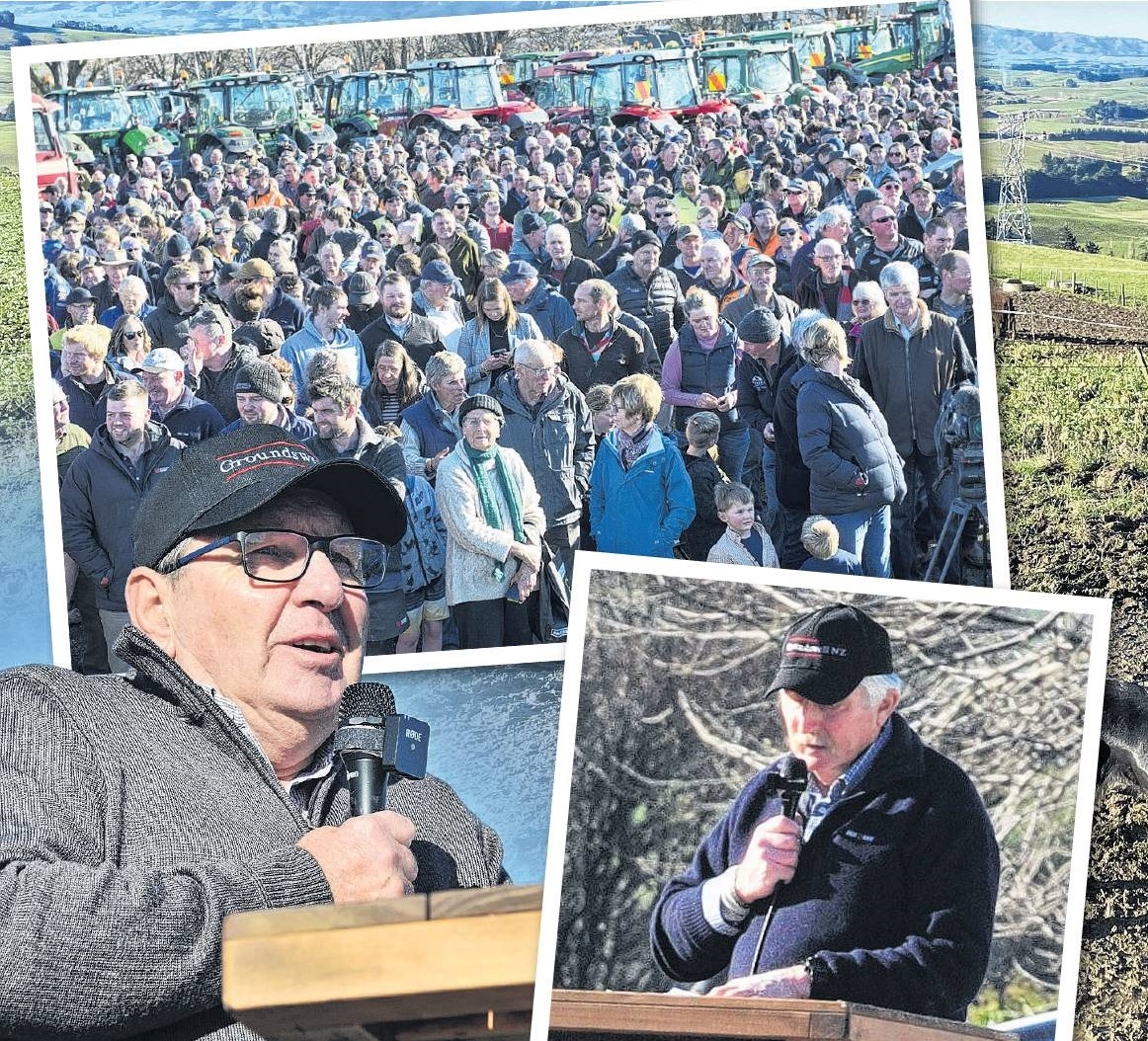 Making their voices heard: (clockwise from bottom left) Bryce McKenzie speaks at the Howl of a Protest in Gore; the crowd listens to the address; Mr Paterson addresses the crowd in Gore. PHOTOS: GERARD O'BRIEN/SHARON PATERSON

Asked what skills he had gained through his involvement with Groundswell, Mr McKenzie said he felt like he had lived his life for it.

These days, like Mr McKenzie, Laurie Paterson (70) spends a fair bit of time glued to his cellphone.

But he can Bluetooth it to his hearing aid so can continue working on Waikaka Station, where his grandchildren are the sixth generation to live on the property.

Mr Paterson has been a tireless supporter of the Hereford breed and his contribution to the beef industry was recognised when he was made an Officer of the New Zealand Order of Merit in 2016.

When it came to why he was so passionate about Groundswell and what it was doing, he said it was "probably the same as everybody that’s involved".

"They are worried not about themselves as ... [much as] what’s going to happen to their kids, their grandkids. The family farm, if we keep this up, is gone.

"If New Zealand goes to corporate farming, does New Zealand really want family farms gone? They need to just have a good think about that," he said.

Being a fourth-generation farmer, with the sixth generation already showing promise, was "pretty powerful".

"It’s family farms that care for the land," he said.

Asked about the effect his commitment to Groundswell had had on him, Mr Paterson said: "You know what it’s like when you’re doing something and you’re in the middle of it and it moves a little bit every day - it becomes the new normal, doesn’t it?

"We’d certainly like to think we can get a result for Kiwis. We’re not too worried about ourselves, because we’ll be pushing up daisies soon enough."

On protest day, Mr Paterson was being interviewed by radio at 5.50am. He managed to get some farm work done but by the time it came to head for Gore on his tractor, he realised he had run out of time to clean it.

So he managed to slip into a carwash in Gore — something he had never done before and he was not entirely sure what to do.

The attendant told him it still had money on it from the previous customer, so he managed to get his tractor washed and "blow-waved and waxed".

"It was going to be a good day, I discovered, at that stage."

Like Mr McKenzie, he knew the protest was going to be big, but seeing the scale of it in Gore was "pretty overwhelming"

— from the tractors "coming from everywhere" to the utes parked bumper to bumper at the showgrounds, the people on the street giving thumbs up as the convoy passed by and the barking dogs.

"I reckon they would have wanted a lot of water that night because they barked all day."

The pair were quick to deflect attention from themselves, Mr Paterson saying they were surrounded by a group of "common-sense people".

"One of the biggest things about that protest was it could have gone absolutely nuts, but the people doing it were common-sense people who weren’t going to do something stupid."

They did not have to spend any money on the protest - people just volunteered to help out.

"If that’s not the Kiwi spirit, I don’t know what is," Mr Paterson said.

Mr McKenzie acknowledged Groundswell had not actually achieved anything yet apart from getting the interest. But it did have a plan, which would not be revealed until August 16.

Groundswell’s "Enough is Enough" message, outlining the group’s concerns, which was delivered at the protests, gave the Government a month to address the issues, or it would take further action.

"We have never ever not offered a solution in everything we’ve stood for. We’re not against any of the stuff; we just think there’s a better way to treat everybody far better.

"It all comes back to one thing: some of these regulations are unworkable - you cannot get around that," Mr McKenzie said

In his response to the protest, Agriculture Minister Damien O’Connor has said he appreciates farmers’ concerns and others raised at the protests "but we also need to keep the commitments we have made to make rivers clean and swimmable, address climate change and fix our planning laws".

He said the Government was listening and had heard the concerns raised.

Mr McKenzie said until those concerns were addressed, anyone thinking Groundswell was going to go away was wrong, 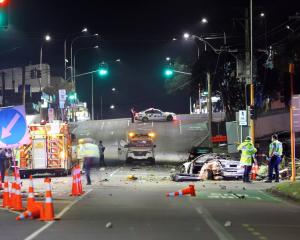