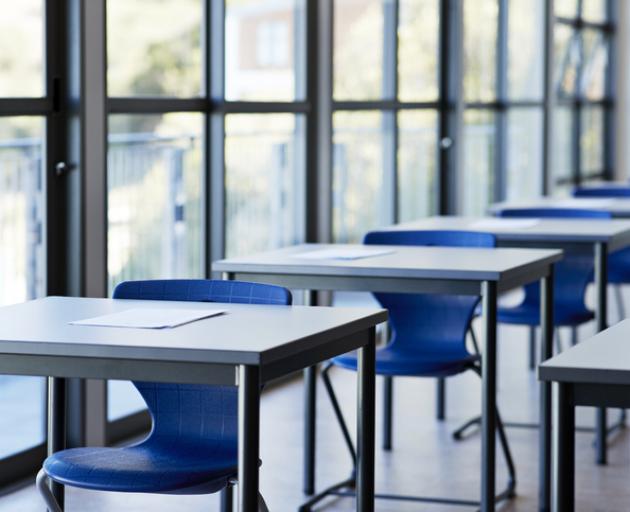 A teacher has denied an inappropriate relationship with his year 12 student at a South Auckland school in 2019. File photo: Getty Images
A teacher who allegedly put his finger into the top of a student's pants, took her to the beach in his van, invited her to a concert, and went to her house where they were alone, has denied having an inappropriate relationship with the girl.

"She was just a student who wanted a lot of attention," the man told a Teachers Disciplinary Tribunal hearing on Thursday.

The registered teacher has denied grooming the student, who was in Year 12 at a South Auckland school in 2019 when the relationship developed.

The teacher is charged with engaging in serious misconduct by forming an inappropriate relationship with the girl.

The tribunal heard he offered the girl rides home from school events, bought her food and jewellery, shared pizza with her at her home, spent time alone with her, and allegedly physically touched her.

The lawyer for the Teaching Council complaints assessment committee, Claire Paterson, suggested these were all clear signs of early grooming behaviour; tentative touching, hot and cold behaviours and buying gifts.

"I am still not prepared to accept that I had formed an inappropriate relationship with this student," the teacher responded.

The man said he became a teacher because he wanted to "give something back".

"I wanted to give the students as much opportunity as I had. I want to leave a legacy behind."

He denied ever having private outings with the student, gift-giving, having dinner together or any physical contact.

However, he did admit to driving the student home alone, going into her family's home and gifting her a cellphone.

Tribunal chair Theo Baker asked the teacher why he had the girl's number in his phone.

The teacher said it was because she would always disappear on school camps.

Call and text logs showed the student and teacher in regular contact. One text included the teacher asking the student what she was up to after school.

He admitted that now, looking at the evidence, he could see how he had crossed some boundaries, but at the time he did not think these actions would be considered as boundary-crossing.

The teacher admitted to not properly reading through a guide given to him by the school.

The handbook contained crucial information with detailed rules around communication with students.

Paterson asked the teacher why he thought he didn't need to read the handbook, especially with this being his first teaching job.

"I would have flicked through to read the pay and holiday section," he answered.

Earlier in the hearing the tribunal heard the teacher offered to take the teen to a Metallica concert.

The student's grandmother said the teacher offered the teen a spare ticket to attend the concert with him, his friends and his girlfriend.

"I spoke to him about it," the grandmother said. "He told me that the ticket was a friend's who could no longer attend."

The grandmother paid the teacher $170 but never received the ticket.

The teacher's lawyer, Dzinta King, said her client would reimburse the money.

The man claimed the student asked to attend the concert with him.

"I didn't see anything wrong with it and asked for her to check with her grandmother first," he said. "Her grandmother and I then exchanged phone numbers to discuss more."

The grandmother also told the tribunal she and her husband returned home one night to find the teacher in their house alone with their granddaughter.

"It was around 8.30pm. I remember noticing that the curtains were drawn. This was odd because we never drew the curtains. We lived down a back section. No one could see into our house."

She said her granddaughter lied to the pair, telling them her teacher had dropped her home after kickboxing.

Instead, the tribunal heard the teacher and student had spent the evening at the house together and had driven to get pizza for dinner - allegations the teacher denied.

"I remember my husband and I having an argument about the matter," the grandmother said.

"He said to me, 'What the hell is her teacher doing here at this time of the night?'."

The grandmother told the tribunal that the regular occurrence of gifts, including jewellery, posters and a cellphone from the teacher added to her suspicion over the nature of the relationship.

"When you start putting everything together all of a sudden it starts becoming very concerning."

The principal told the tribunal the school discouraged teachers from giving students rides home and if needed, "We ask for the student to ride in the back".

"We discuss this at the start of every year and I remind teachers throughout the year to keep their professionalism at all times."

The two-day hearing concluded and a decision is expected following counsel submissions on June 3.