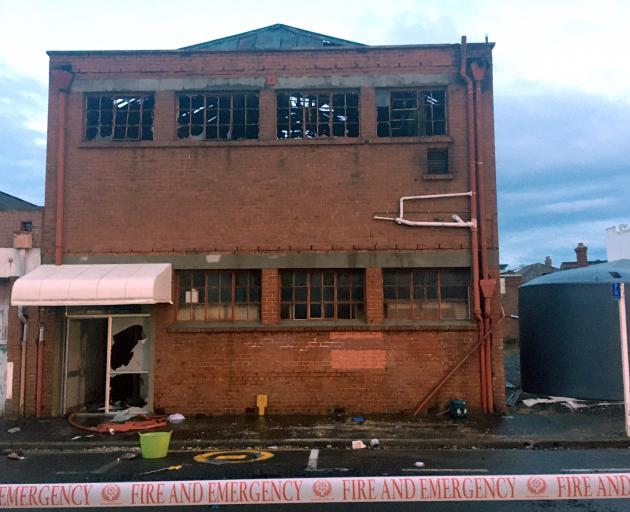 The building was significantly damaged in a blaze in July. Photo: James Hall
Firefighters are working to stop part of the roof on a Dunedin building, previously damaged by fire, from lifting off in high winds.

St Kilda firefighters were called to a building on Hillside Rd, near King Edward St, after reports of roofing starting to lift in the wind.

The building had previously been damaged by fire, she said.

Firefighters were using a ladder to try to make the building safe.

The winds are keeping emergency services busy about the south this afternoon.

North of Dunedin, a caravan has been blown off the highway.

Police were notified at 2.35pm that a caravan had been blown off State Highway 1, and one lane was blocked, a police spokeswoman said.

There were no reports of injuries, she said.

Police were contacted just before 1.30pm about reports of a tree that had toppled and was blocking both lanes on the bridge, a police spokeswoman said.

The tree was also leaning against power lines.

The Dunedin City Council had been advised and traffic management was in place, she said.

According to Aurora Energy's website, power is out in Gladstone Rd, North Taieri, Puddle Alley, Silverstream Valley, Fairfield and Wingatui.

MetService has strong wind warnings in place for Otago and Southland, saying west to northwesterly gales could become severe in exposed places at times, with gusts reaching 120kmh.

The forecaster said strong gusts could damage trees, powerlines and unsecured structures. It warned that driving conditions could be dangerous for high-sided vehicles and motorcycles.

The NZ Transport Agency has wind warnings in place for several southern highways, including SH1 from Gore to Palmerston, SH8 Raes Junction to Milton, and SH83 Omarama to Pukeuri.

The winds have also posed problems on some southern ski fields, forcing the closure for the day of Coronet Peak and Cardrona Alpine Resort.