Parts of the South Island woke to snow, rain and wind as a short, sharp southwest change hits the region, closing some state highways and affecting alpine roads.

Extreme caution is urged on roads in the southeast area of Southland, particularly around Edendale, Wyndham, Glenham and the Catlins. Road surfaces are very slushy, the Southland District Council advised this morning,

It said this morning, State Highway 87, from Outram to Middlemarch, is open to 4WD only.

Queenstown Lakes District Council said the Crown Range Road was still closed due to snow but contractors were working to get it cleared.

"It's not just the Crown Range that's seeing snow. Higher parts of Fernhill are getting coated, while flurries are also being spotted at lower altitudes across the Wakatipu Basin."

The NZTA advised caution to motorists taking SH1 from Dunedin to Palmerston due to winter driving conditions. Snow showers are possible at times about the summit the Northern Motorway (SH1) until 6pm today, but little if any snow was expected to settle on the road. 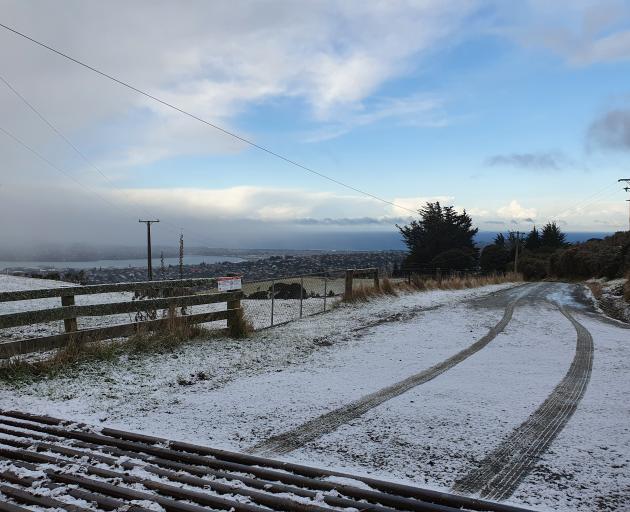 Central Otago District Council said this morning the roads were a mix of wet and dry with temperatures sitting between -1degC and 5deC.

In Fiordland, the Milford Road (SH94) is closed, from Hollyford to Chasm, due to heavy snow which was expected to continue on into this evening. It is likely to reopen tomorrow. Up to 25cm of snow was expected about the summit, with lesser amounts down to 200 metres.

In Southland, SH93 Mataura to Clinton,  SH94 The Keys to Centre Hill and  SH96 Ohai to Nightcaps are affected by snow and ice.

It looks to be a brief run of bad weather, however, as tomorrow conditions are expected to begin clearing for a mostly fine weekend in Otago and Southland.

MetService forecaster Cameron Coutts said the weather would be "pretty miserable", and road snowfall and wind warnings were in place across much of the region.

MetService said there was a snow watch for parts of Fiordland, Southland and Clutha as heavy snow above 400m was expected.

However, snow has blanketed the rural area of Hillend, north of Balclutha, which has an elevation around 200m.

The SDC said the weather was creating hazardous driving conditions.

"It has started snowing in Te Anau township now."

Snow has settled at the summit of the Crown Range Road this morning. Photo: MetService

After an overnight change last night, Dunedin city was expected to reach a high of 9degC today with high winds, rain and some snow flurries on hills above 200m, Mr Coutts said.

In Queenstown, wind, rain and snow flurries would be about until mid-afternoon today, with a high of 9deg.

Snow showers were expected on the Crown Range Rd until 6pm today, and 1cm-3cm was expected to accumulate near the summit, with lesser amounts down to 200m.

Check out that well-defined southerly approaching the South Island! 😮 🌬️

It will bring snow to the lowest levels so far this winter in Southland, Otago, and the West Coast.

Snow: all you need to know in 2️⃣0️⃣ seconds ❄️ 👇 pic.twitter.com/3h6lccarCg

A heavy snow watch was in force for Fiordland, south of Dagg Sound, and Southland, south of Mossburn, and Clutha, with periods of snow above 400m forecast until 4pm today.

Clutha and Southland were under a wind watch until 1pm today and there could be gales of up to 100kmh in some places.

Mr Coutts said the South would see a gradual improvement tomorrow and a cold, slightly windy but fine weekend.

DUNEDIN TO WAITATI HIGHWAY (Northern Motorway, SH1)
Snow showers are possible at times about the summit of the road until 6pm today, but little if any snow is expected to settle on the road.

CROWN RANGE ROAD (linking Queenstown and Wanaka)
Snow showers are expected at times today. Between 10am and 7pm Thursday, 1 to 2cm may accumulate about the summit of the road, with lesser amounts down to 300 metres.

MILFORD ROAD (SH94)
Snow is expected to affect the road until tonight. Between 10am and 6pm Thursday, expect an additional 5 to 8cm of snow to accumulate on the road near the tunnel, with lesser amounts down to 300 metres.

LEWIS PASS (SH7)
Snow is expected to affect the road today. Between 10am and 11pm Thursday, 4 to 8cm of snow may accumulate on the road about and west of the summit, with lesser amounts down to 500 metres.

ARTHUR'S PASS (SH73)
Snow is expected to affect the road today. Between 10am and 11pm Thursday, 4 to 7cm of snow may accumulate about the summit of the road, with lesser amounts down to 400 metres. 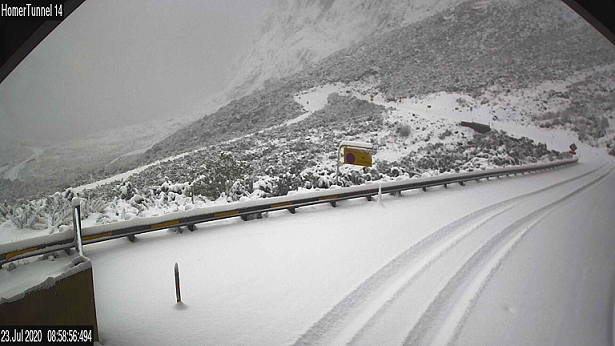 LINDIS PASS (SH8)
Snow showers are expected at times today. Between 10am and 8pm Thursday, 1 to 2cm may accumulate about the summit of the road, with lesser amounts down to 300 metres.

HAAST PASS (SH6)
Snow showers are expected at times today. Between 10am and 7pm Thursday, 1 to 3cm may accumulate about the summit of the road, with lesser amounts down to 300 metres.