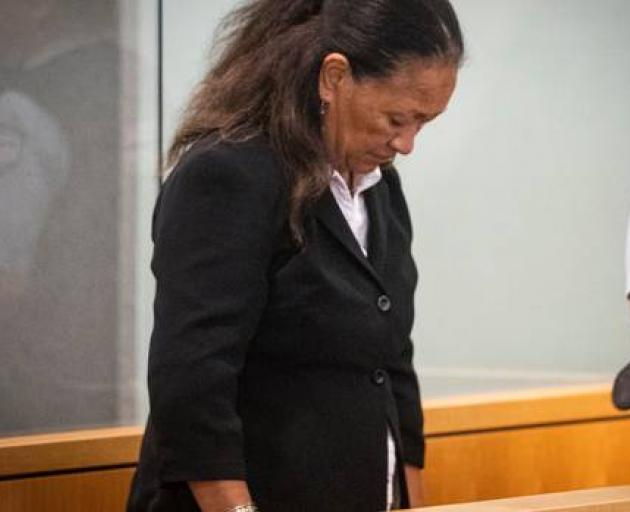 Karen Anne Ruddelle in the High Court at Auckland during her trial for the murder of her partner Joseph Ngapera. Photo: NZ Herald
A South Auckland woman has been sentenced to home detention for the manslaughter of her partner - who she stabbed to death after years of domestic violence.

And the judge who heard her case said he was certain her experience with abuse and a simple urge to protect herself and her child were behind her offending.

Ngapera died in November 2018 after being stabbed twice in the chest.

The first blow pierced his ribs, lung and heart.

Ruddelle was charged with murder but after a trial in the High Court at Auckland she was found guilty of the lesser alternative charge of manslaughter.

She never denied she was responsible for Ngapera's death - but strongly denied there was any murderous intent.

Rather, she said she was acting in self defence trying to protect herself and her teenage son, and was suffering from social entrapment - effectively battered women's syndrome - after a lifetime of domestic violence - including at the hands of Ngapera.

At her trial in February a jury heard evidence from about 40 witnesses, including from Ruddelle herself and several domestic violence experts who spoke about coercive control and social entrapment - formerly referred to as battered women's syndrome.

And they heard how Ruddelle, after a life of abusive relationships and trauma, had symptoms of PTSD and how she and Ngapera would drink together and he would become abusive.

The trial jury was unanimous in finding Ruddelle not guilty of murder.

A majority verdict was accepted finding her guilty of manslaughter.

The hearing had been scheduled for earlier in the year - but was delayed due to the Covid19 pandemic.

Ruddelle has been on bail since her trial.

Ngapera's father, John Ngapera Snr, said he struggled to believe his son was dead but was forced to face reality.

"When I heard about what happened to my son it hit me really hard," he said.

"I was walking around crying, I was shocked, I didn't believe it… I was in a daze.

"When it first went to court, I listened, I was sobbing inside."

He spoke of giving Ngapera up at 3 to be raised by his brother.

"I couldn't help but think maybe I did wrong… this is the pain I carry - maybe I shouldn't have given him away?

Ngapera Snr said his faith had helped him get through his son's death.

But he and his family were "very sad".

Less than a year after Ngapera died, his brother died, and then his son.

His father said losing two boys and a mokopuna in such short time was immensely devastating.

"I feel the weight of all these losses… I feel the loss of my son," he said.

His sister Ngaire Ngapera was tearful as she spoke about her brother's death.

"It has been a very tiring and uneasy time for us," she said of the death and court process.

"Joey's death has affected us badly."

She said it was hard to hear Ruddelle's defence during the trial and her claim of being a victim of Ngapera's violence.

"We buried the victim - Joey. She can't be the victim," said Ngaire Ngapera.

"There can't be two victims here - we only buried one.

"She stabbed him twice… she lunged at him both times, she pulled the knife out after the first stab and then stabbed him again.

Ngapera's sister-in-law, Pride Ngapera, read on behalf of whānau who could not be in court.

She said the "tragic death" of Ngapera had impacted on many people.

He was a sibling to six, a father to two, an uncle, nephew, cousin and "friend to many".

She spoke of Ngapera's childhood and times spent with family.

Though Ngapera moved to Australia for a chunk of his life, he held contact with his loved ones.

"He was very much a big part of our lives," said Pride Ngapera.

"We were all a very close family… we only ever knew Joey to be kind, respectful and loving.

"Our family has endured so much sadness… it's one thing to lose a loved one, but to lose them at the hand of another… No one deserves to die in the horrendous way Joey was subjected to."

The family suffered other blows following the manslaughter, including the death of Ngapera's first son.

Pride Ngapera said dealing with that alongside the court proceedings was horrendous.

It was also hard to sit in court and see "Karen portrayed as the victim and Joey as the villain".

She said hearing Ruddelle's account of domestic violence "made everything feel so raw and ugly".

"Karen mentioned how she loved Joey so much that she thought she could help him… her focus should have been to change and fix herself before trying to change Joey or staying in a toxic relationship," she told the court.

"We would like to say that we forgive but right now we feel it too generous… we all loved Joey… no matter what we loved him unconditionally."

She wanted Ruddelle to serve "a long overdue sentence" for the crime that was committed.

Crown prosecutor Yelena Yelavich said Ruddelle's offending had a number of aggravating features including extreme violence and the effects on the Ngapera whānau.

"The victim impact statements make it clear that the loss for the family has been profound," she said.

Yelavich said the jury, in finding Ruddelle guilty of manslaughter, had rejected her claim of self defence.

"At most, there was an implied threat to Ms Ruddelle," she said.

Ngapera was not armed, did not harm Ruddelle or her son on the night and had not been reported for domestic violence for some time before the fatal stabbing, Yelavich posed.

So, the physical force exerted on Ngapera by Ruddelle was excessive.

The Crown sought a sentence starting point of five years in prison and said there should be a "discrete" discount for "personal factors" including Ruddelle's background including social entrapment and her remorse.

Yelavich was opposed to a sentence of home detention.

Ruddelle's lawyer Shane Cassidy said her background was highly relevant to her actions.

"We're all a product of our upbringing," he said.

He urged Justice Palmer to hand down a term of home detention.

Justice Palmer said he had to denounce Ruddelle's conduct, deter others from doing similar and take into account her rehabilitation.

He also had to consider the impact on Ngapera's family, and the domestic violence element to the case - both between the couple and during Ruddelle's "turbulent" upbringing and early relationships.

He said while there were issues with violence, abuse and alcohol, it was clear Ngapera and Ruddelle genuinely loved each other.

He summarised the evidence heard by the jury during the trial including evidence for and against Ruddelle and her defence of being a battered woman.

And the details of the killing were outline again in court - in front of members of both Ruddelle and Ngapera's whanau.

"His whānau are all victims," said Justice Palmer.

"I consider the context of family violence as an integral part of the offending."

He said aggravating factors were the use of a weapon, the seriousness of the violence and impact on the Ngapera family.

The mitigating factors were that Ruddelle acted instinctively as a result of a perceived threat, that she did suffer from a degree of social entrapment,

He said that explained why she stayed in an abusive relationship and she "did have heightened sensitivity" that was "conditioned" by her past experience of domestic violence both with Ngapera and other men.

"His conduct that night, and in the past, led directly to your actions," he told Ruddelle.

"I consider it was reasonable for you to have expected Mr Ngapera to be about to inflict violence on you and your son.

"I accept you were substantially motivated by an urge to protect your son."

He set a starting point of three years and six months in prison.

He gave Ruddelle discounts for personal and cultural background including her life of abuse and violence and her remorse.

"You have experienced a lifetime pattern of cumulative harm... and a series of violent relationships," he said.

He gave her a further discount for adhering to her conditions.

After discounts Justice Palmer reached a sentence of 23 months in prison - which allowed him to consider home detention.

He acknowledged the Crown opposition to that, but said given her compliance, the fact she was not a risk to others and that she was raising her youngest son - prison was not appropriate.

"Irrespective of where you live, you will have to live the rest of your life with guilt... you killed the man you loved," said Justice Palmer.

As Ruddelle broke down in tears in the dock Justice Palmer sentenced her to 11 months home detention.

"Thank you, thank your honour," she said,

Ruddelle addressed the court from the dock before she was sentenced.

She had been willing to participate in a Restorative Justice meeting with Ngapera's family, but after initially indicated they would be interested, they declined.

Ruddelle wanted to ensure they knew how sorry she was for his death.

"There are no words that I can say that will bring comfort for your sorrow and loss but to say how much remorse I have and how truly sorry I am," she read.

"I have deservingly suffered with guilt and blame for what I did that morning… I take responsibility for my actions.

"I brought upon you all despair and for this I am sorry. I cannot take back what I have done and again I am sorry.

"I have divided your family by taking from you a beloved son, a father, a brother, an uncle, a cousin and grandfather.

"I write this not with pride or ego but with humility… I seek not forgiveness while there is still mourning in your hearts… I pray there be some closure today."

DO YOU NEED HELP?

If you're in danger now:

• Phone the police on 111 or ask neighbours of friends to ring for you.
• Run outside and head for where there are other people.
• Scream for help so that your neighbours can hear you.
• Take the children with you.
• Don't stop to get anything else.
• If you are being abused, remember it's not your fault. Violence is never okay