0 Comments
Groundswell NZ’s opposition to the Three Waters initiative is more about a lack of democracy than the reforms co-founder Bryce McKenzie says.

Yesterday the group presented an about 500-strong petition to Gore Mayor Tracy Hicks asking the council to stop funding Local Government New Zealand (LGNZ) and for the council to hold a referendum regarding the Three Waters reforms.

About 30 people accompanied the petition which was signed by Gore District residents.

The Three Waters reforms were not the issue, Mr McKenzie said.

"This is about local democracy and the fact that our councils are making decisions without asking their ratepayers what that decision should be.

"It’s the erosion of our democracy and the ratepayers don’t get a say."

While it was true residents voted in councils in to make decisions on their behalf this was a "major" issue and the "handover" of assets generations of ratepayers had paid for.

"Now we’re going to lose them to another identity." 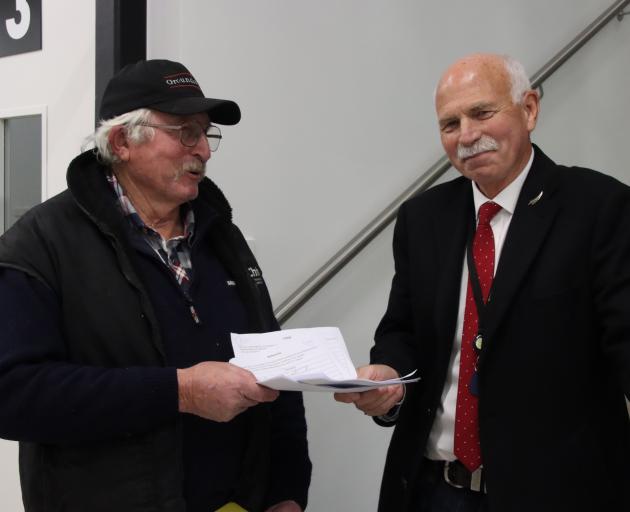 Groundswell co-founder Laurie Paterson (left) presents a petition to Gore Mayor Tracy Hicks asking the Gore District Council to stop funding Local Government New Zealand and for the council to hold a referendum regarding Three Waters. PHOTO: SANDY EGGLESTON
A local referendum rather than a national one was needed for this important issue, Mr Paterson said.

"This ratepayer-financed organisation has not acted in the best interests of the people of this region in possibly the biggest issue to face local government in 30 years and LGNZ is no longer fit for purpose".

Mr Hicks said he would make sure the petition was added to a council meeting agenda.

"We will consider it in depth as a council."

After Mr Hicks received the petition he spent more than half an hour answering at times confrontational questions.

Some members of the group questioned whether it was a conflict of interest for Local Government Minister Nanaia Mahuta to be overseeing the Three Waters reform.

He did not think it was, Mr Hicks said.

"It’s the Minister of Local Government dealing with a local government issue."