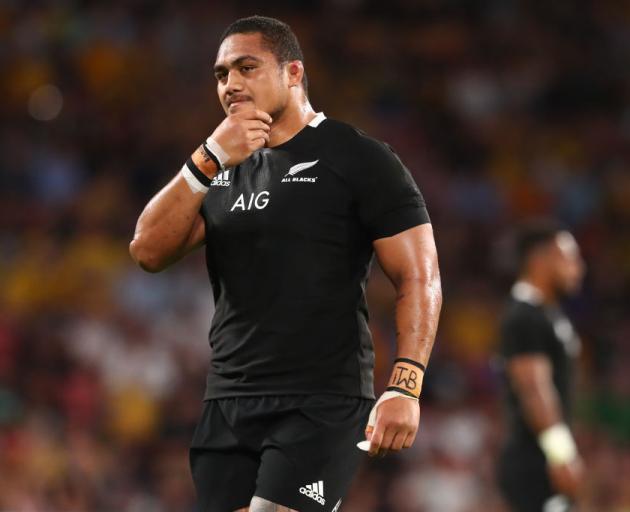 Ofa Tu'ungafasi was sent off for a high tackle in Saturday's match in Brisbane. Photo: Getty Images
All Blacks prop Ofa Tu'ungafasi has been banned for three weeks following his red card in last weekend's defeat to Australia in Brisbane.

World Rugby issued new guidelines on penalising high tackles in May last year in a bid to drastically reduce the number of head injuries and concussions in the sport.

A Sanzaar judicial hearing found Tu'ungafasi guilty of contravening Law 9.13, which states: "A player must not tackle an opponent early, late or dangerously", after Tu'ungafasi made high contact with Wallabies winger Tom Wright in the first half of the Bledisloe Cup finale on Saturday.

He will miss the All Blacks' final two Tri-Nations games against Argentina, and a pre-season game for the Auckland-based Blues.

The judicial committee deemed Tu'ungafasi's high tackle merited a mid-range entry point of a six-week ban, due to the act being deemed to be foul play involving contact with the head.

However, Tu'ungafasi's early guilty plea and clean judicial record saw his ban reduced by half.

He was one of two players to be sent off in the fierce encounter, which the Wallabies won 24-22.

Wallaby loose forward Lachlan Swinton was also red-carded for a high tackle, and on Tuesday suspended for four weeks due to two prior offences on his record.

All Black Scott Barrett and Wallaby Marika Koroibete also spent time in the bin after being shown yellow cards.

The Tri-Nations, which has replaced the Rugby Championship this year, continues with the All Blacks playing Argentina in Sydney on Saturday.