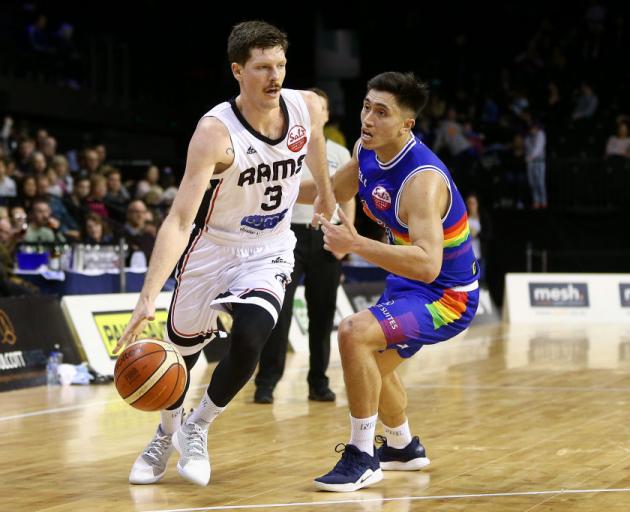 Cameron Gliddon of the Rams attempts to evade Reuben Te Rangi of the Saints last year. Photo: Getty Images
Details released about the first draft for New Zealand NBL show the revamped competition is casting the net far and wide to find players to fill the seven teams' rosters.

Some of New Zealand's top locally-based players have shunned the six-week competition, which will be played without the Wellington Saints, Southland Sharks and Hawkes Bay Hawks.

Any male aged over 15 and based in New Zealand or Australia is eligible to enter the first NBL player draft.

There is no limit on how many players can put their name forward for potential selection.

The draft will be held on June 11, which is 12 days before the competition tips off.

NZNBL general manger Justin Nelson expected to get some players trying their luck.

"In some ways there is a bit of nostalgia up for grabs for people being able to say 'I was up for grabs in the first ever NZNBL draft' so I think we may get a few players just keen to see their name in the draft pool.

"But no doubt the coaches will quickly identify who they are after."

The draw for the 56-game competition based in Auckland has the Airs playing the Giants in the first game on June 23.