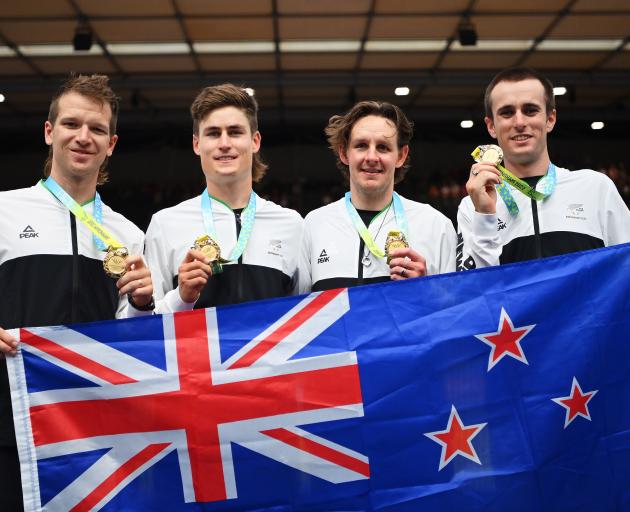 The Kiwi men's team pursuit won New Zealand's first gold at the Games, beating England by two seconds in the final of the 4000m event, and they were followed by the women's team sprint in standing on the top step of the podium.

The women's team pursuit had started proceedings with silver, and the men's team sprint ended it with bronze as all three colours were claimed in a busy stint at the London velodrome.

The men's quartet of Aaron Gate, Jordan Kerby, Tom Sexton and Campbell Stewart were first to take gold - going into the event as slight favourites and qualifying first for the final, before stamping their authority when it mattered most in a Commonwealth Games record time of 3:47:57.

They were slower out of the blocks in the final, but after 800 metres hit the front and slowly increased their lead until it was too much for the hosts to reel back in.

Gate told Sky Sport he knew gold was in the bag when the home crowd started to hush.

"With a few laps to go there I was thinking 'oh they're not making so much noise there anymore, hopefully that's a good thing for us'. When we finally saw it, it was a massive sigh of relief."

That relief will be partially a result of their Olympic heartbreak in Tokyo, when Gate's crash scuppered their chances in the bronze medal race, but Stewart, who was part of that Olympic squad, says everything came together perfectly this time.

"We set it up in the qualifying there, we had a few things we needed to work on. We knew we needed to go faster and every single one of these guys, we committed 100 per cent – it all came together perfectly." 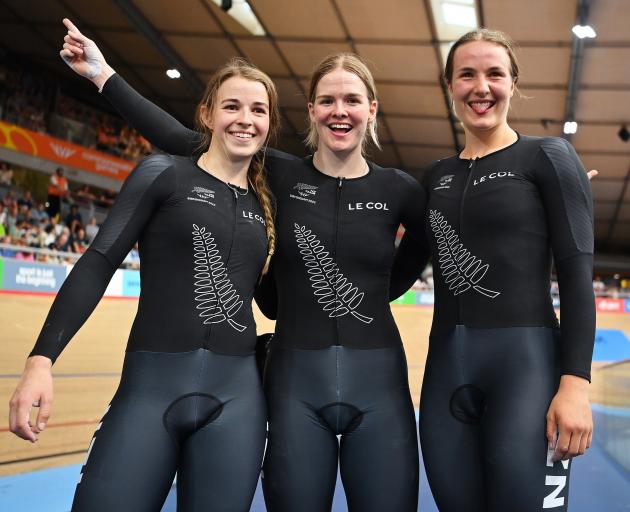 It was an extremely impressive effort to make the final given they had lost Ally Wollaston to injury before the event. Her replacement Ellesse Andrews was there literally to make up the numbers to ensure the Kiwi quartet could compete, lining up for the start before immediately swinging off in order to stay fresh for the team sprint final which followed an hour later.

That left Bryony Botha, Michaela Drummond and Emily Shearman riding as a trio against the four-pronged Australians, and it was never close, with the Australians cruising to a victory by 5.32 seconds in a Commonwealth Games record.
Botha was thrilled to have even made the final given their numerical disadvantage.

"It's so awesome – we started today not knowing what we could do, we only had three riders, we had no idea at the end of the day we'd be on the second step of the podium so we're extremely proud and so happy with what we've done."

Drummond told Sky Sport that their performance bodes well for the future.

"It makes a big difference, 4k is a really long way with only three riders. It makes us really confident – if we can do this sort of time as a three, imagine what we can do with Ally back in the squad, so we're really looking forward to what's to come."

The decision to keep Andrews committed to the sprint team paid off when Andrews, Rebecca Petch and Olivia King won gold, beating Canada by .576 seconds in the final.

The trio set a Games record of 47.841 seconds to qualify first for the final then went better in the gold medal decider, with a time of 47.425 earning New Zealand their second gold of the Games.

They made it four medals just minutes after, with the men's sprint team beating Canada by .717 seconds to claim bronze.

After a false start where a Canadian rider had a mechanical issue, Bradly Knipe, Sam Dakin and Sam Webster led all the way to make it four medals from four attempts for the Kiwis on the track.