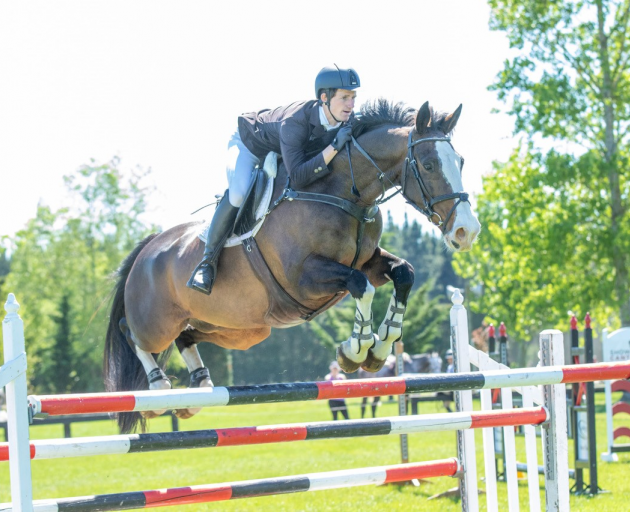 Todd, a 21-year-old agricultural commerce student at Lincoln University, has been riding the 12-year-old Awatuna Jonesy for some time now, and the pair have developed a very strong partnership.

“This is the first win we have had in Grand Prix,” said Todd.

There will be no time for celebrations however as Todd has an exam to sit today.

Todd is currently based in Christchurch while he is attending university but originally hails from the West Coast.

Fellow West-Coaster, Penny Jones, who owns the Littoria gelding, was on hand to walk the course with Todd and give him some pointers. Penny has coached Todd for many years, from back in pony club days, achieving a lot of success in pony club teams events including winning the prestigious NZPCA Eventing Championships.

Rosa Buist-Brown decided to step Vali up to Grand Prix today after performing very well on the first day of the Show Jumping Canterbury’s Labour Weekend Carnival and was delighted to be placed second after producing the only clear round in the first round. However a rail in the second round and a slower round than Todd’s second (and clear) round meant they had to settle for second. Kimberley Bird and Cera Cassina were third.

In the Country TV / Saddlery Barn Pony Grand Prix, it was the consistent pair Sophie Geddes and Te Ngaio Raggamuffin who triumphed.

“This is the third Grand Prix win we have had out of three starts this season,” said Sophie.

The pair are heading to Blenheim next weekend for the Marlborough show and then plan on competing back in Canterbury to build up for the National Show Jumping Championships in mid-January at McLeans Island.

The Lex Peddie designed course proved quite a challenge for the ponies with no double clear rounds in the two-round competition.“It was definitely the hardest we have had this season... The lines were really tough,” said Sophie.

The other riders to also have clear second rounds included Johanna Wylaars on Wembleybrook Tiffany who finished in second place, and Meg Bisset on Freestyle Twyst and Shout, who finished third.

Earlier in the day, Bella Taane and Kennebrook Jester won the Pony Mini Prix, capping a great month for this pair who were part of the winning Kaiapoi team in the Springston Trophy eventing competition at the beginning of the month and also being placed at the South Island three day event.

The Tavern Harewood Horse Mini Prix was won by Lincoln’s Steffi Whittaker and On the Point Eve with a brilliant clear round, the only one in the competition.

“This was only my third show this season,” said Whittaker.

“I’ve just come back from being in Europe with Daniel Meech, and then I was in Australia in the South Island Young Riders team.”

Steffi decided to hold off starting Eve in the main class this weekend as a result, but intends to step up soon to the higher level.

“I am definitely aiming to start her in the Grand Prix for the Nationals!”

Waipara’s Emily Barton was the winner of the NRM Open Horse High Points 1.10m competition in the show hunter section.

Riding My Countess, Emily was especially pleased as she had only recently stepped up to this level.

“I’ve had a few placings and wins at lower levels with My Countess, and we were second in the 1m National Championships Amateur title last year,” she said.

The pair have a special relationship. Emily saved the mare off the dog-tucker truck as a yearling, and has had the now ten-year-old ever since. She is planning on competing at this year’s Nationals in the top show hunter classes, and if things go well, on to the Horse of the Year Show in March.

Show Jumping Canterbury’s next show is the Christmas Cracker show on 6-8 December 2019. The National Show Jumping Championships show is also being held in Christchurch on the January 16-19.