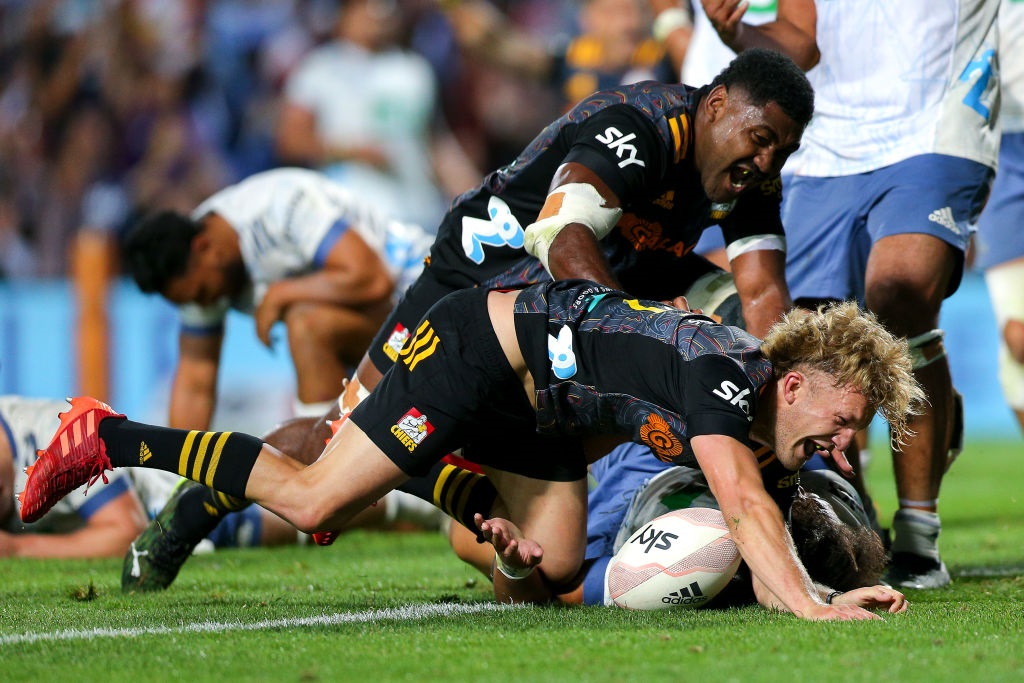 An elated Damian McKenzie after scoring the winning try for the Chiefs. Photo: Getty Images
Damian McKenzie's last-gasp try earned the Chiefs a thrilling 15-12 victory over the Blues in a hard-fought battle at Waikato Stadium in Hamilton.

The All Blacks fullback crossed the line with only seconds to go on Saturday night before slotting over the conversion to earn the Chiefs a second win a row after last week's victory over the Hurricanes.

Less than two minutes to go. Down by 4. Then Luke Jacobson & Damian McKenzie do this ...@ChiefsRugby + @skysportnz #CHIvBLU #SkySuperRugbyAotearoa pic.twitter.com/1LLxL5kaOK

The Blues had looked set to take the points after Tom Robinson had given his side the lead 18 minutes from time, only for McKenzie to steal the win in the dying seconds.

The Auckland-based side had dominated in terms of possession and penalty count throughout the opening 40 minutes, but were unable to turn their superiority into a sizeable halftime lead.

It took until the 24th minute for the visitors to register on the scoreboard when Akira Ioane spun clear to take the ball over the line from close range.

The opportunity had come after a poor line-out by the Chiefs allowed Finlay Christie to pick the ball up several metres from the line and, although the home side initially frustrated the Blues, Ioane eventually scored.

The Blues looked set to add to their total on the half-hour mark as Mark Telea burst towards the line, only for Chiefs fullback McKenzie to throw in a try-saving tackle.

That was one of many frustrating passages of play for the Blues, who declined five kickable penalties in the first half  and only managed to put seven points on the board by the interval.

The Blues were to rue not taking those opportunities as the Chiefs swung the game in their favour.

McKenzie's 46th minute penalty was followed by a try from Samisoni Taukei’aho as the home side took the lead for the first time in the match.

But the Blues fought back, with Robinson driving down the touchline to cross the line despite the desperate attentions of Chiefs' scrumhalf Brad Weber.

Otere Black missed the conversion having failed with a penalty attempt just moments earlier to keep the Chiefs within touching distance while Dalton Papalii was denied a decisive try due to obstruction.

And with time running out McKenzie swooped to seal a thrilling clash, converting his own try to claim victory.