'Mean Gene' goes from the league field to the speedway 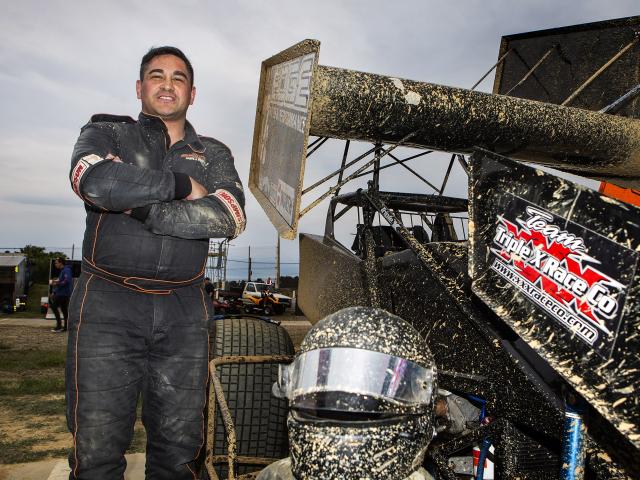 Hornby Panthers second-rower Gene Spooner is hoping to add a speedway title to his resume. Photo: Mainland Photos
You'd think after a winter of bashing his body around the rugby league fields of Canterbury 'mean' Gene Spooner would be forgiven if he sat back, enjoyed the sunshine and let his body recover.

But that's the last thing he wants to do, having now switched his attention to racing his 750 horsepower V8 sprintcar at Ruapuna in Christchurch.

"I raced the lesser powered V6-powered, six shooter sprinters for a few years and finished second in last year's New Zealand championship, but the big V8s was where I always wanted to be."

Spooner, a second rower for the Hornby Panthers, also left his mark on the oval ball code, playing for the Runaway Bay Seagulls in the Gold Coast premier grade, but he is sure he has never faced a sporting challenge quite like the sprintcars.

"These things are fast and you're almost out of control most of the time.

"The power to weight ratio is mind-blowing, and with the dirt tracks they can get pretty rough.

"Add to that the concentration that is required and you go through the wringer each race."

Spooner got his sprintcar career off to a great start, finishing fourth in the opening night feature at Ruapuna - but he admits it has been a steep learning curve.

"Being a rookie in this class, I just want to keep my nose clean.

"If I can put in some good laps and adjust to tracks that I've never raced on, I'll be happy."

Spooner is not wanting for enthusiastic support either, with his parents Jack and Karen, along with Hornby mates Jason Corboy, Johnny Abel and Kris Jemmett, helping out in the pits.

"There are also two other notable sportsmen who race in the sprintcars, with former Black Cap cricketer Nathan Astle and former Kiwis hard man Whetu Taewa being regulars in the class.

"We are all really competitive, but the South island sprintcar boys are more than happy to help the new boys - it's great."

While not expecting miracles, Spooner is hoping he can snaffle a heat win, saying that would rank right alongside his grand-final win with the Panthers several years ago.

At his next outing on Saturday night, he will contest the third round of the VINZ Summer Slam Series at Ruapuna.

"I was second overall following the first round, but last week I had a few issues and have slipped back a bit. I'll have to give it heaps to make up some lost ground."