PHOTO: ODT FILES
An inability to travel overseas and the need to keep top players at a high level were the drivers to get a new national premier hockey league under way.

The new league was announced by NZ Hockey yesterday.

It will involve eight teams (four mens’ and four womens’) with 20 players in each team.

The league was made possible with funding announced yesterday by Sports Minister Grant Robertson.

Black Sticks men’s coach Darren Smith said the league was yet to decide what form the teams would take, but it was likely to be along regional lines.

The teams would include all Black Sticks and also the tier of players immediately below. Players were spread across the country at the moment and working in small training groups.

They would come together for the league but would not be based in Auckland for a significant period. Players would not be paid.

Smith said with overseas travel off the agenda there was a need to have the top players facing each other and keeping sharp.

"Competition is important. If you can’t travel, can’t get overseas, then you have to look at something different. This competition is going to a higher level. The quality will be really good," he said.

"It is a chance for new guys. The guys are back playing club hockey and will then be involved in this for August and September and then we will have our nationally contracted squad in October.

"There is lots of opportunities coming up. Obviously there is the Olympics next year, but very quickly we are going to have a World Cup, Comm Games.

"There is going to be a few retirements after the Olympics — there always is — so this league will give new guys the exposure of playing at this level."

Experienced Black Sticks striker Hugo Inglis was making good progress from a back operation and was based with family in Arrowtown. He was likely to move to Auckland soon.

Other top southern players, such as Kane Russell and Blair Tarrant, would be involved, along with newcomers such as James Nicholson and Malachi Buschl.

The league would be broadcast on Sky Sport.

All other national tournaments had been canned by NZ Hockey this season. 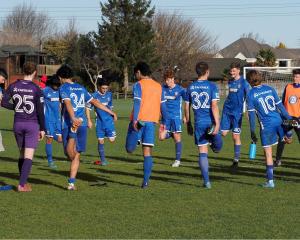