From Russia, with Robbie 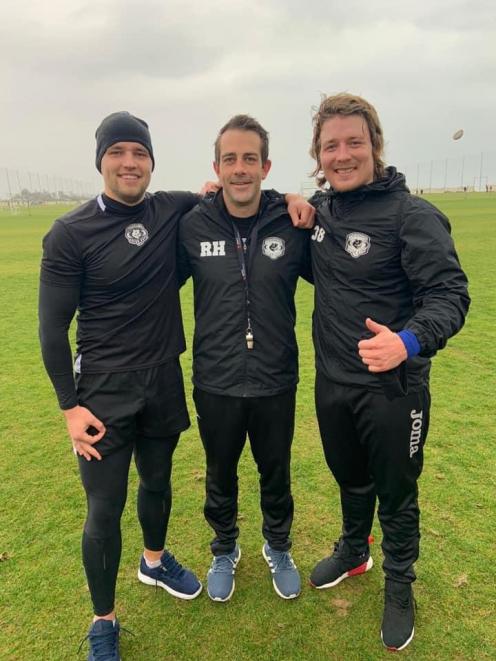 Christchurch strength and conditioning coach Robbie Harlow, centre with two professional rugby players Alex Golov, left and Sergey Belenkov, right who both play in the Russian league. Photo: Supplied.
Rugby in Russia feels like a world away from most things at present for Christchurch’s Robbie Harlow.

The 35-year-old has spent the past two years in strength and conditioning roles in Spain and Russia.

He is currently the head strength and conditioning coach at Strela Kazan, one of the teams in the Russian professional league with 38 contracted players working alongside former South African player JP Nel.

Harlow has worked his way up to a head role having been the Crusaders strength and conditioning intern in 2018 and also with the Canterbury women’s sevens team.

“When I left two years ago and went to Spain it was for a bit of a break and a change of scenery.

“I wanted to test myself in an unfamiliar environment and see how it would go.

“I got offered a director of rugby role in Spain but I wanted to keep going on the path I was on so the Russia opportunity came calling.”

Harlow has learnt the art of patience during his time there.

“Learning and accepting different cultures and how to work with different people,” he said.

“You have to try to find each person’s trigger and how to get the best out of them.

“You can't beat having conversations with people to find out how they tick.

“I’d say I'm dealing with players of a semi-professional mindset getting paid as professionals,” he said.

“When training gets hard there’s a hamstring injury, but they are always fine to play on a Saturday.”

Harlow said because his team was not able to train together at present due to Coronavirus restrictions as they wait for their season to restart, it’s made for a lonely time living by himself in his apartment in Kazan, a city in the south-west of the country with a population of 1.3 million people.

“It has been lonely, we’re allowed to go out to exercise but often I’ll just wander to a supermarket and then another one and then another, not to buy anything but just for something to do.”

He said he has been able to use the time to get on top of his master’s degree in sport and exercise.

“It’s helped me with my qualifications, that’s for sure - I don’t have a PlayStation so studying has been my best way of passing the time.”

Harlow is contracted through to November and will then decide what his next decision will be.