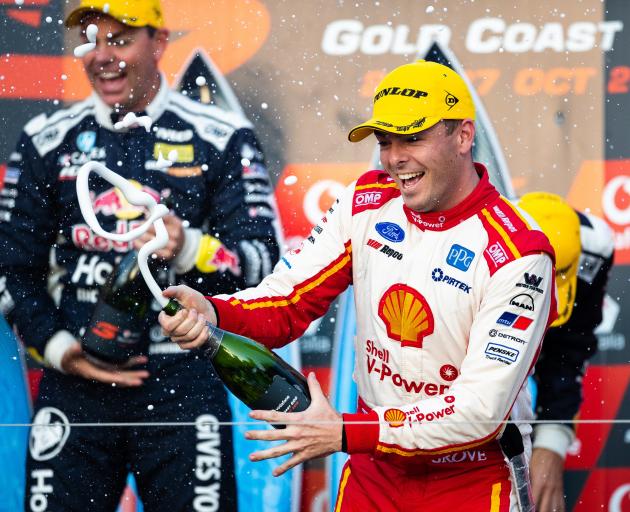 A subdued McLaughlin stretched out to an unassailable lead with a ninth place finish at the Sandown 500 today.

The DJR Team Penske driver just needed to finish the 500km race to the title but it seems the controversy of his maiden Bathurst victory last month just can't escape him.

McLaughlin and co-driver Alex Premat were set to start the race in fifth place only to be pushed right to the back of the grid after officials penalised them for an engine breach at Bathurst.

It denied McLaughlin any chance of claiming the title with a victory. McLaughlin and Premat ran quietly in the middle of the pack for much of the day but did enough to put the title beyond doubt a round early in a rather circumspect manner. They were issued a 15-second time penalty along the way for a refuelling infringement at their first pitstop.

Jamie Whincup and Craig Lowndes won the race after Kiwi driver Shane van Gisbergen was forced to pit while leading with 10 laps remaining.

For Whincup and Lowndes, it was their first Sandown 500 win together in 12 years.

Lowndes and Whincup won their Saturday sprint races and then took out the 500km main event to score maximum points, but it had seemed as though they would have to settle for second. Van Gisbergen exited from his final pitstop with a 10-second buffer, but just as a third straight Red Bull one-two finish loomed, his Commodore gave way at the right rear.

McLaughlin wasn't exactly ecstatic with the result and title outcome. After his Bathurst title, DJR Team Penske were hit with heavy sanctions including the largest fine in Supercars history for asking Fabian Coulthard to deliberately slow behind a pace car while McLaughlin was leading late in the race.

The late call to punish him today only added to his frustrations.

"It's been a pretty tough month. Obviously things happen…we'll just push on as a team. I'm so proud of everyone. I don't want to take away from Jamie and their crew they did a great job all weekend. For me right now we're subdued because we know we've got another one to run and we really want to win that one. It's nice to roll into Newcastle with a full head of steam and be somewhat relaxed about it," McLaughlin said after the race.

The ninth placing leaves McLaughlin on 3648 championship points, an unassailable lead from van Gisbergen who is 541 points back in second, with one event remaining in Newcastle in a fortnight.

McLaughlin joins the likes of Norm Beechey, Glenn Seton and Marcos Ambrose to win two Supercars titles. Whincup was the last driver to go back-to-back in 2013 and 2014.