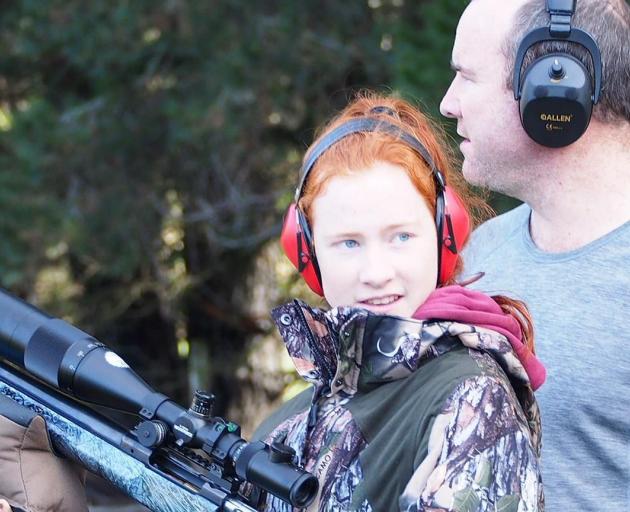 Central Southland College Year 13 pupil Jamie Hudson (17) and her father Greg during a long range rifle shooting championship.
Sometimes it may be a flash as the bullet hits the metal target, sometimes just the sound of a faint tink.

One kilometre is a long way to hit a target, two kilometres is not a problem for the Year 13 Central Southland College pupil.

Jamie said she doesn’t practise, she just travels to competitions with her father, Greg Hudson, who had also competed in individual and team events throughout New Zealand and overseas… and who she had also out-shot.

In our family, “just me and dad compete, four to five times a year”.

Competitors aim to shoot at metal targets, ranging in size from 13cm discs to 60cm by 45cm targets from 600m and up to 2km away.

It could take three seconds on a calm day before hearing the tink, or four to five seconds on a windy day, she said. “Sometimes I don’t hear it.”

The targets had “flashes” to let shooters know if they had been successful, she said.

The metal plates were “more durable” than paper targets, especially in the rain or wind.

Using a Precision Rifle Series (PRS), her results have been impressive regardless, winning a variety of titles during the past four years.

The custom-built rifle, with scope, was heavy and was almost as tall as Jamie, reaching to her shoulder.

The enjoyment and competitiveness of the sport had been passed down from her father, with her shooting for as long as she could remember, she said.

Although she did not practise much, Jamie said, “I don’t… just on the day before competition when we are sighting in our scopes.”

Jamie said depending on the range, she had two rifles.

One for short, quick shots on the “short range”, especially when she had to move to different targets, and the other, the “big gun” for long distance, which was “heavy”.

“One of the competitions, I have to carry it up a mountain.”

Every year she had competed, she had won, including the New Zealand Alpine Long Range Rifle Shooting Matches Championship in the female and junior sections for the past four years, and the Sparrowhawk NZ Individual Long Range Competition, in the Rakaia Gorge behind Albury, she had “won overall consecutively for the past three years”.

“There are no age groups, so I compete with the adults.”

As for the future, Jamie was keen to compete overseas, and had planned to compete in Australia in the PRS and Wyoming in the United States of America, in the World Champion Series.