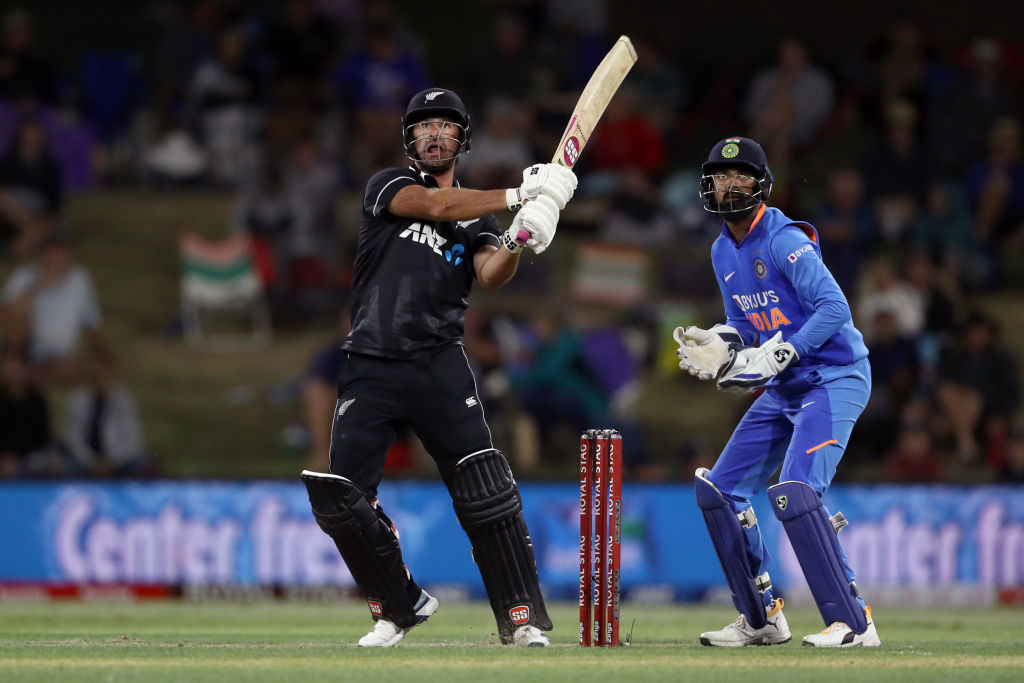 New Zealand's Colin de Grandhomme clubs a six against India. Photo: Getty
A New Zealand cricket team will head to Australia on a winning streak, with plenty of reasons for optimism.

And this time, they might actually put up a fight when they get there.

The Black Caps' ODI squad will look to accomplish what the test team did not, after completing a superb 3-0 series sweep of India, claiming an impressive five-wicket victory at Mount Maunganui's Bay Oval last night.

Set up by Martin Guptill (66 off 46 balls) and Henry Nicholls (80 off 103) and finished by Colin de Grandhomme's absurd unbeaten 28-ball 58, the Black Caps' successful chase of 297 completed a series which has reinforced – if not convincingly enhanced – their status as one of the top ODI sides in the world.

Perhaps New Zealand's dominance shouldn't be a surprise, considering their World Cup run, but after the disastrous test series against Australia and regular Twenty20 collapses against India, a turnaround was desperately needed in what is undoubtedly now New Zealand's favourite format.

Two tests against India await before next month's three-match Chappell-Hadlee series, but if Trent Boult, Matt Henry, Lockie Ferguson and Kane Williamson all head into the series injury-free, then Australia – who just lost to India in their own ODI series – loom as a beatable proposition, and present a chance to potentially salvage a summer.

The rediscovered form of Guptill, and his burgeoning opening partnership with Nicholls, is possibly the biggest reason for – and potential indicator of - the Black Caps' success. After a World Cup in which the Black Caps' openers went nine games without a stand of more than 35, they've now produced partnerships of 85, 93 and 106 against India – the first time in their history that New Zealand's openers have combined for 85 or more in three consecutive matches.

Last night's partnership came in rapid time too, as Guptill and Nicholls put on 106 in 99 balls, to put the Black Caps well ahead of the asking rate in their chase of India's 296-7.

It was a solid effort by the New Zealand bowlers to restrict the visitors to under 300, making a strong start to reduce India to 62-3, and then largely bowling well at the death to halt any late destruction after Shreyas Iyer (62 off 63 balls), KL Rahul (112 off 113) and Manish Pandey (42 off 48) had rebuilt the innings.

For Iyer and Rahul, it was a continuation of a fantastic tour, and India's middle order produced partnerships of 100 and 107 to threaten a late barrage. However, Hamish Bennett took some handy late wickets to end with 4-64, while Kyle Jamieson (1-53) backed up his first ODI heroics with a solid second showing.

While it's been a so-so series for the bowlers, they got the job done, and put in a commendable performance as a second-string unit, of which the seamers especially are unlikely to see any game time in Australia if the combined 323 ODI wickets at 25.6 of Boult, Henry and Ferguson are fit.

The batting lineup should remain though, and that's no bad thing. Guptill's horror World Cup run has been completely flipped, he bringing up his 50 from 29 balls and requiring something special - a stunning Yuzvendra Chahal delivery - to dislodge his off-stump and stop his onslaught.

Nicholls was more circumspect, but thanks to Guptill, he was allowed to be as he continues to make a strong case for a long-term spot at the top. And, although Williamson (22 off 31) and Ross Taylor (12 off 18) couldn't convert, Tom Latham (32 not out off 34) and a belligerent de Grandhomme stepped up in the clutch moments, with a rapid 80-run partnership to see New Zealand home with 17 balls to spare, and seal the series sweep.

While their success admittedly comes at the nadir of the ODI four-year cycle, considering that India beat the Black Caps 4-1 in their ODI series last year, and this is New Zealand's first sweep of India in a series of three games or more, the result is still significant – and one which bodes well for their chances in Australia.

Sure, history says they are unlikely to succeed across the ditch. The only ODI "series" New Zealand have won in Australia was their first, in 1983 – a one-off Bushfire Appeal challenge match, which was reduced to 35 overs due to rain.

But, if there's one thing this team has shown over the past week, it's that drastic turnarounds are by no means impossible.