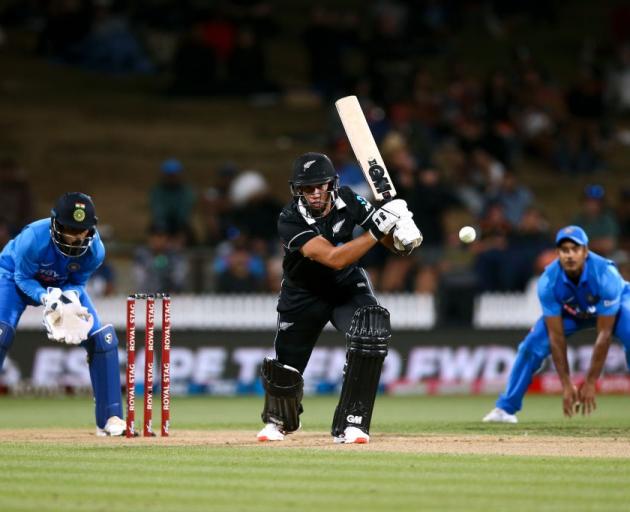 Ross Taylor plays the ball through the offside on his way to a century against India at Seddon Park last night. Photo: Getty Images
Maybe, just maybe, the Black Caps were right all along.

They had pleaded that they'd been unlucky in the Twenty20 series – that Super Over defeats weren't a reflective measure of skill, instead carrying a massive dollop of luck. Were mental frailties at play? No, they insisted, poor execution and bad luck was to blame.

Last night, they proved that theory, pulling off the second-largest chase in New Zealand's ODI history, sensationally chasing down 348 for a famous victory at Seddon Park.

A sublime unbeaten 109 from Ross Taylor, and brilliant contributions from Tom Latham and Henry Nicholls, saw the Black Caps home with four wickets and 11 balls to spare, claiming a win that should calm the overblown fears about the long-term ramifications of their previous eight-match losing streak.

If the Black Caps had suddenly succumbed to a team-wide mental malaise, then explain Taylor being involved in the Twenty20 clutch catastrophes, but then becoming the ODI saviour. If they couldn't handle the pressure of a run chase, then do tell how their second-toughest chase of all time was handled with relative ease.

No, perhaps they had an inkling – derived from their motto of not getting too high after victories or too low after defeats - that this wasn't as bad as it seemed. That with a bounce here and an edge there, maybe they would have won that Twenty20 series, or at least halted the hysteria that came from the eventual sweep.

And, in a format in which they've been on the right side of many thrillers recently – and the wrong side of one, uh, kind of important match – the Black Caps again showed that they are not a bad team. Far from it.

Bad teams see a target of 348 and crumble to a three-figure defeat. Bad teams see they're missing their star skipper, and their three best fast bowlers, and concede they don't have a chance against one of the best sides in the world.

Instead, the Black Caps produced one of the great ODI chases. Taylor was phenomenal, Nicholls set a strong platform and Latham produced an startlingly powerful cameo, together overhauling a vaunted Indian batting lineup, who had set their team up for a near-certain victory.

347-4 looked for all money a winning total, after Shreyas Iyer (a maiden ODI century) KL Rahul (88 not out from 64 balls) and Virat Kohli (reaching 50 for the 101st time in ODI cricket) had punished the Black Caps bowlers.

Without their three first-choice seamers – Trent Boult, Matt Henry and Lockie Ferguson - Tim Southee and Hamish Bennett were tasked with blunting the Indian batsmen, and were largely toothless.

Southee's first six overs went for 29 but his last four leaked 56, while Bennett ended with 0-77 on his ODI return, and with the quicks negated, the Black Caps lacked attacking weapons.

Mitchell Santner (0-58) and Colin de Grandhomme (1-41 from eight) are complementary options, while Ish Sodhi curiously only got four overs in the only match he'll play this series, despite producing the best delivery of the summer to dismiss Kohli with a superb googly through the gate.

They left the Black Caps needing a mighty chase, and Martin Guptill and Nicholls got the hosts off to a solid start, with Guptill rotating the strike and Nicholls finding the rope. But when Guptill departed, an 85-run stand had been broken, and when Tom Blundell's ODI debut quickly ended, stumped for nine, the required run rate had hit eight an over.

Nicholls, in his full-time audition for the long-term opening role after his World Cup cameo, was excellent, adding 62 from 57 balls with Taylor until, on 78, he went for one quick single too many and was run out by a diving Kohli.

No problem though, because that just brought Latham to the crease, and from a slow start – three off his first 13 balls – he exploded, sweeping with ease and pulling with power.

Taylor, dropped on 10 by Kuldeep Yadav, made him pay for the let-off, Yadav leaking 84 runs, while even the usually miserly Ravindra Jadeja (0-64) and Jasprit Bumrah (0-53) weren't immune to Taylor's brilliance.

A phenomenal 117 runs were blasted from overs 30-40, including 22 from a Shardul Thakur over, as the pair added 138 from 80 balls to leave the Black Caps needing 39 from 50 balls when Latham was caught in the deep for a rapid 69.

Jimmy Neesham and de Grandhomme's quick dismissals would have raised heartbeats, but with Taylor bringing up his 21st ODI century off 73 balls, the Black Caps surged to a memorable win - calmly keeping the faith. Because, as they had argued, they had never lost it.