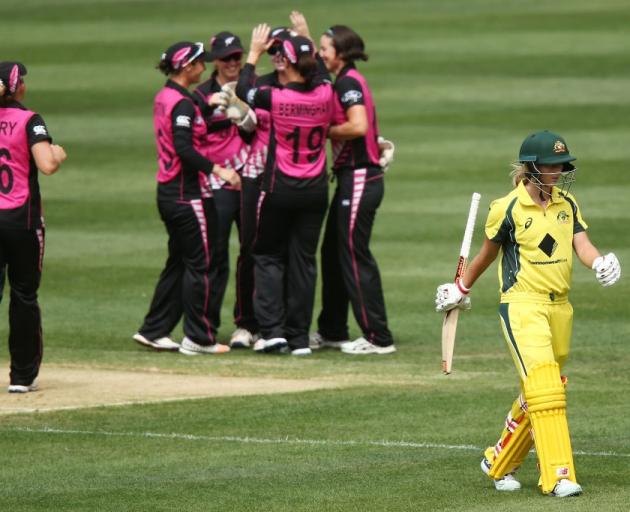 The White Ferns celebrate getting Australia captain Meg Lanning out, something they will hope to do again in Australia this summer Photo: Getty Images
Cricket Australia has announced a full schedule for the 2020-21 summer, including matches against the New Zealand men's and women's sides.

Although still subject to change due to the uncertainty of the coronavirus pandemic, the full international schedule underlines Australia's confidence that the season will be able to go ahead amid loosening restrictions.

The White Ferns will take on Australia in September in a three-match Twenty20, followed by a Rose Bowl ODI series between the sides in early October.

The Black Caps will cross the Tasman later in the summer for an Australia Day series starting on January 26.

Kane Williamson's side will wrap up the Australian home summer with a one-off T20 clash in Sydney on February 2.

Australia will also welcome several other nations including India in a four-test series starting in Brisbane on December 3.

Cricket Australia boss Kevin Roberts said in a statement: "While acknowledging the difficulty in navigating a global pandemic, we are nonetheless encouraged by the progress Australia is making in combating the coronavirus and the positive impact that is having on our ability to host an exciting summer of cricket in 2020-21.

"We know that circumstances or events beyond our control could mean that the final schedule potentially may look different to the one released today, but we'll be doing everything we can to get as much international cricket in as possible this summer."

The T20 World Cup is still scheduled to start in Australia on October 18 but it is widely expected to be postponed due to the pandemic.

NZ Cricket are yet to announce its home schedule for the 2020-21 season but are expected to host Australia sometime this summer.