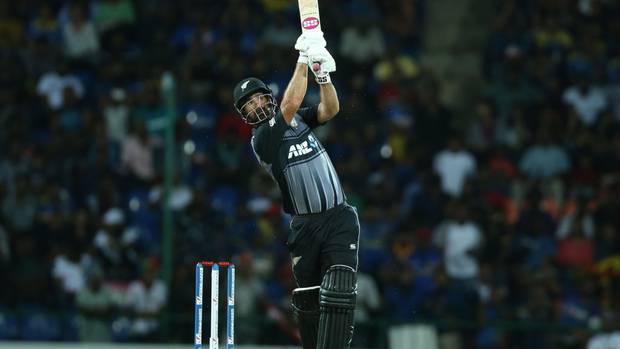 Colin de Grandhomme goes big. Photo: Getty Images
They were put under pressure by Sri Lanka's batsmen, then needed a mighty fightback to overcome their bowlers. The rain, of course, had to make an appearance as well. But, after all of that, the Black Caps' Twenty20 World Cup build-up is underway – with a win.

It was a win that looked extremely unlikely at 39-3 in the eighth over, with a chase of 175 on the docket, but a superb 79-run partnership off just 38 balls between Ross Taylor and Colin de Grandhomme put them in with a chance, and Daryl Mitchell and Mitchell Santner saw them home, claiming a five-wicket win with three balls to spare.

In some ways, the topsy-turvy encounter was a fitting start to a series that has an experimental feel to it, in a format that can be hellaciously random at the best of times. The Black Caps had rested Kane Williamson and Trent Boult, and they will be joined in heading home by Lockie Ferguson, who fractured his thumb on the eve of the game.

Ferguson's contributions were missed as Sri Lanka racked up an excellent score, led by Kusal Mendis, who produced the best Twenty20 innings of his career with 79 from 53 balls. He took a liking to Seth Rance early and showed little problems scoring off de Grandhomme, but the Black Caps managed to peg back the hosts in the middle overs.

Santner was his usual superb self in the shortest format, taking 1-22 from four overs as he tied down the Sri Lankan middle order, and should have had Mendis' wicket on 55 but for a poor attempt at a catch from Ish Sodhi.

Sodhi was a bit more wayward than usual but still bowled decently for figures of 3-0-23-0, while Southee was excellent throughout the innings, living up to his status as captain by claiming 2-20.

He arguably made one major error though, and that was bringing back Rance for his final two overs after Mendis finally departed, to an excellent catch in the deep from Martin Guptill. Having already leaked 27 runs from his first two overs, Rance was tonked for another 31, including 23 from his last over.

Isuru Udana came in and smacked 15 off the final three balls of the innings – a crucial contribution – while Niroshan Dickwella's 33 off 25 balls was also a helpful knock considering the success had by the spinners on a slower wicket.

With Scott Kuggeleijn (2-0-17-0) and Sodhi still having overs left, Rance's lack of execution proved costly as Udana launched him down the ground – making the Black Caps' chase significantly more difficult.

That task got even harder after New Zealand's top order failed. Colin Munro got a trademark Lasith Malinga inswinger first ball and saw his middle stump removed from the ground, Guptill holed out in the deep for 11, and Tim Seifert was awfully scratchy, mustering just 15 from 21 balls.

That left a massive task for de Grandhomme and Taylor, who initially rebuilt the innings, requiring 113 runs off the last 10 overs. Somehow, they were unflustered by the daunting proposition, and summarily swatted 17, 18 and 17 off the following three overs.

Taylor smacked back-to-back sixes over cow corner on his way to 48 from 29 balls, while de Grandhomme reached 44 from 28 balls, but neither could see the innings through. When Taylor departed, rain fell, with New Zealand needing 31 from 19 balls – and slightly ahead on Duckworth-Lewis-Stern.

It would have been an unsatisfying conclusion to an interesting contest, but fortunately the rain disappeared, and the players were left to decide the victor.

Santner tonked Udana over long-on to turn a tricky equation of 26 off 14 balls into a manageable 20 off 13, before Malinga and Mitchell both attempted to be match-winners with their trademark traits.

Malinga's effort – an attempted yorker – was sprayed down the legside for five wides, but Mitchell's stylish signature was much more effective, sending a glorious straight drive for six which ensured the Black Caps would be starting the series in style.