Coach on standby as another Black Cap falls ill 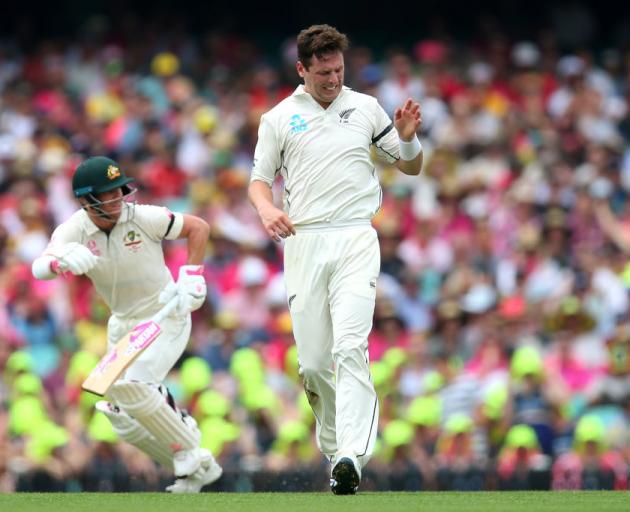 Matt Henry of New Zealand reacts while fielding off his own bowling during day one of the test between Australia and New Zealand at Sydney Cricket Ground. Photo: Getty Images
The Black Caps' lengthy list of walking wounded has grown further, with bowler Matt Henry confirmed to have broken this thumb, while batsman Jeet Raval is suffering from the flu.

Henry suffered the injury yesterday, attempting to field a drive off his own bowling from Australian opener Joe Burns.

He went off the park briefly to deal with a split fingernail before returning, but an x-ray last night confirmed the broken thumb.

Henry will continue to bowl, with his thumb in a splint, though his batting availability will be dependent on the match situation.

The injury continues a horror series for the Black Caps' fast bowlers, with Lockie Ferguson suffering a calf injury in the first test in Perth, and Trent Boult fracturing his hand in the second test in Melbourne. Spinner Will Somerville also split the webbing on his non-bowling hand yesterday.

It has also been a disastrous test on the health front, with skipper Kane Williamson, Henry Nicholls and Mitchell Santner all missing the test due to illness, and now Raval also going down with the flu.

Raval was given a surprise re-call due to the above absences due to illness, but didn't take the field today, and will be unlikely to be able to take his designated position at No 3, potentially leading to a move up the order for Glenn Phillips.

Black Caps batting coach Peter Fulton has been forced to get into his whites as a potential sub fielder.

Black Caps physio said Vijay Vallabh said the situation was unprecedented in his time with the team.

"I've been around the team four and a half years, and I haven't experienced anything like this. I've seen the boys play through some pretty horrendous diarrhoea and vomiting in India. They're quite resilient characters but in this situation with higher heart rates and fatigue, I think we made the right call."

Henry was a controversial selection for this test, ahead of Tim Southee, and showed little to justify his selection yesterday.

He finished day one with figures of 21-1-68-0, ballooning his test bowling average to 51 from his 12 tests, and it will be a battle to improve those figures with his thumb in a splint for the rest of the test.

Black Caps coach Gary Stead explained that he was hoping – and still hopes – that Henry will provide a point of difference due to his extra pace compared to Southee.

"We just felt we wanted a bit more pace out there with what Matt offers over Tim. The workload that Tim's had, not just in the last two tests, but you put the last four together it's somewhere around about 200 overs in a short period of time. I just felt what Matt offered might have given us a point of difference," Stead said.