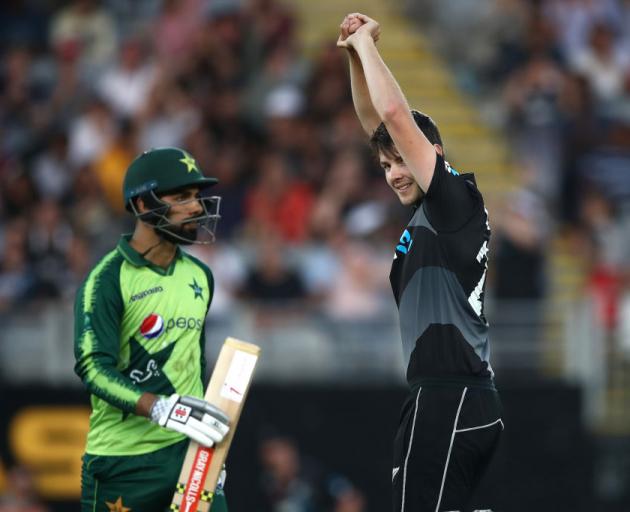 If the locals looked up from their steaming plate of Buffalo wings with blue-cheese sauce for just a second, though, they would have seen one of their own enjoying one of the more electrifying international debuts.

Looking like the happiest man in the country, the fresh-faced Jacob Duffy ripped off the top of the Pakistan batting order then took the most spectacular non-catch of the year, leaping high on the third man boundary to take a one-handed stunner, only to be undone on review when it was discovered his fingernail brushed the boundary rope.

The Black Caps continued their unbeaten home summer, squeezing past Pakistan by five wickets and seven balls to spare.

Duffy, 26, broke into the Otago team as a highly touted teen and has spent the past eight years plugging away on the hype-free domestic scene.

He needed just four to take a wicket wearing full national colours for the first time. He needed just a further seven for his second and followed that up with a third a ball later.

His first crack at international cricket, in the toughest format of the game for bowlers, on a ground that sometimes eats its own (remember Ben Wheeler), returned figures of 4-0-33-4, the number only blowing out when he was hammered for three sixes in his final four balls.

That end to his spell – when he curiously changed his angle of attack from his first three overs – will be the pebble under the towel he takes back to the Volts as he leaves the squad to make way for the test players, but he shouldn't let it trouble him for long. Things can go wrong awfully fast on this postage stamp of a ground.

Folks from around Duffy's way don't tend to get too excited about anything other than trout biting in the Oreti River or Bill English stump speeches, but his stunning debut will surely grease the wheels of conversation in northern Southland this week.

It started in the second over, his first, when Abdullah Shafique, in just his second T20I, tried a lofted drive that lobbed up to Mark Chapman. The carnage continued in his second when Pakistan's Mohammad Rizwan toe-ended one to cover and the coup de grace came when he again induced a false shot, this time from veteran Mohammad Hafeez.

When Scott Kuggeleijn and Ish Sodhi followed up with the wickets of Haider Ali and Khushdil Shah to leave the visitors at 39-5, the prospect of a short night's work was real.

Shadab Khan, captaining for the first time, revived the innings with 42 but his knock was ended in the first ball of Duffy's final over.

The attack started strongly though and when Martin Guptill holed out to a brilliant catch from Shadab off the always awkward Shaheen Shah Afridi, nerves might have started percolating beneath the surface.

It might also be time to officially classify Guptill as out of form. He hasn't scored a 50 in any form since the first first-class game of the season and looks caught between the worlds of trying to hit or build himself back into nick.

Devon Conway failed for the first time for the Black Caps, but Glenn Phillips and Tim Seifert put on 44 to make New Zealand slight favourites again when the former holed out for 23 at 65-3.

Seifert then partnered with Mark Chapman for a partnership that bettered the previous one by a run but he holed out off Shaheen at an inopportune time, with 44 needed from five-and-a-half overs. His 57 was a nice innings but he will know he should have been there at the end.

Chapman followed leg before for 34. Like Seifert, his was a pleasant innings where it should have been a match-winning one.

That brought skipper Mitchell Santner out to join Jimmy Neesham, the heroes of the last T20 here against the West Indies. They weren't required to do anything quite so dramatic this time although the symmetry was perfect: Neesham the dominant partner; Santner hitting the six to win.

Pakistan had won the last five meetings between the two sides in this format, the last one being a 47-run thrashing in Dubai two years ago.

That streak is broken, thanks to a kid from the deep south who's been waiting a long time for a chance to shine.