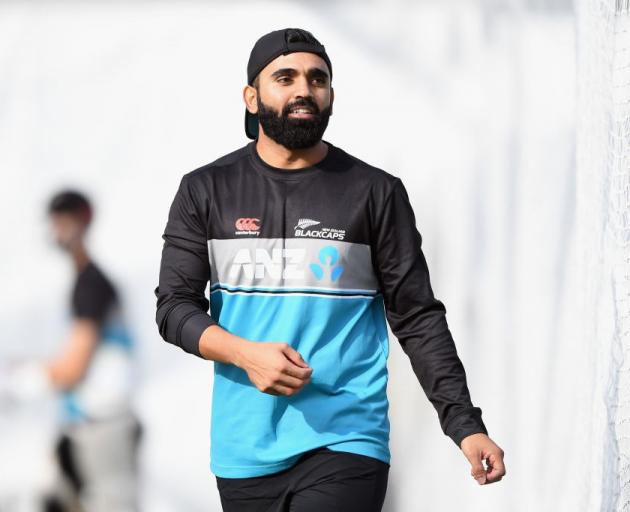 Ajaz Patel has been deemed surplus to requirements for next month's matches on the greener surfaces of Mount Maunganui and Christchurch. Photo: Getty Images
Spinner Ajaz Patel has been left out of the New Zealand squad for the series against Bangladesh less than three weeks after becoming only the third bowler to pick up all 10 wickets in an innings of international cricket.

The 33-year-old achieved the rare feat in the second test against India in Mumbai earlier this month but was deemed surplus to requirements for next month's matches on the greener surfaces of Mount Maunganui and Christchurch.

"You do feel for Ajaz after his record-breaking display in India," coach Mike Stead said in a statement.

"However, we've always applied a horses-for-courses selection policy and believe the players selected best fit the way we want to take on Bangladesh here at home."

Tom Latham will captain the team for an entire series for the first time in place of Kane Williamson, who suffered a recurrence of an elbow injury in India and will miss both tests.

Free-scoring opener Devon Conway returns to the squad, however, after missing the 1-0 series loss in India because of a broken hand sustained when he punched his bat in frustration during the Twenty20 World Cup.

The series opens at Bay Oval on New Year's Day and will be New Zealand's first home test since they won the World Test Championship by beating India in England earlier this year.

The Black Caps are unbeaten in eight home test series going back to their last reverse, a 1-0 loss to South Africa in March 2017.