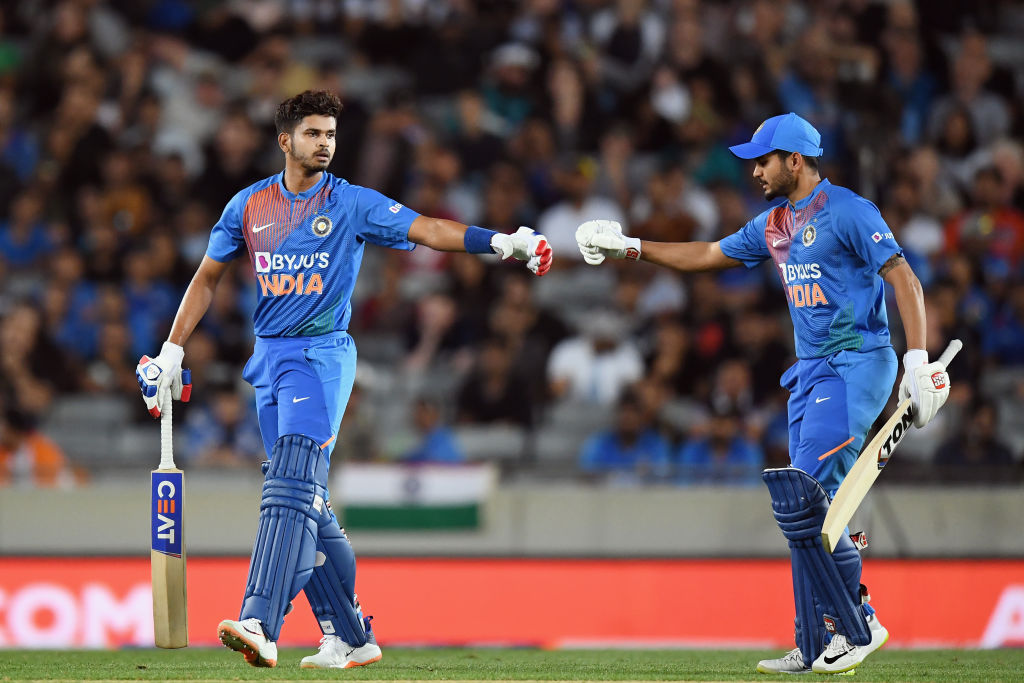 India's Shreyas Iyer (L) and Manish Pandey bump fists during the match against New Zealand. Photo: Getty
The Black Caps batsmen must be wondering just what more they need to do to set a winning total at Eden Park.

It's now just one win for the Black Caps in their last nine games at Eden Park, where their bowlers have struggled to master the venue's small dimensions.

The absence of the injured Trent Boult and Lockie Ferguson didn't help matters, as the Black Caps seamers leaked 118 runs from their 11 overs, getting little respite from an excellent Indian batting lineup who showed their class with an expertly timed chase, capped off by a marvellous 29-ball 58 from Shreyas Iyer.

They needed to be at their best as well, after the Black Caps batsmen produced a total that should have been defended. India had won the toss and bowled first, and while Jasprit Bumrah (1-31) was his usual superb self, Shardul Thakur (1-44 from three overs) and Mohammed Shami (0-53) were wayward, and Black Caps openers Martin Guptill and Colin Munro cashed in.

Some glorious straight drives were mixed with the usual – but just as effective – wild slices as the hosts raced through to 68-0 through six overs, setting a brilliant platform. Yuzvendra Chahal (1-32) and Shivam Dube (1-24 from three) stemmed the flow however, and after an 80-run opening stand, Guptill was the first to go, caught on the boundary for 30.

Munro later followed after a 42-ball 59, and when Ravindra Jadeja removed Colin de Grandhomme for a second-ball duck, the Black Caps finally had been put under some pressure.

Slow starts from Kane Williamson (one off five) and Ross Taylor (four off six) had contributed to those brief concerns, but just as India gained a greater foothold, the experienced pair took control.

Smacking tracer bullets that would be cut off on the boundary on some grounds, Williamson used Eden Park's dimensions to his benefit with an array of fours and sixes, blasting 51 from 26 balls.

Taylor's shots were more routine, unleashing his trademark slog sweeps to send a Shami over for 22 runs, and bring up his first Twenty20 half-century since 2014, ending unbeaten on 54 from 27 balls.

The pair had added 61 from just 28 deliveries, and despite some of Bumrah's expectedly canny death bowling, the Black Caps racked up 203-5 – their seventh highest Twenty20 total.

It was an above-par effort despite the small boundaries, and should have been enough to inspire optimism on their return from the disastrous Australian series. Instead, KL Rahul and Virat Kohli put their bowlers to the sword.

Mitchell Santner's rough patch of form continued, leaking 50 from his four overs, though claiming the handy scalp of Rohit Sharma, but Rahul and Kohli gave India an excellent platform, guiding them to 115-1 before 10 overs had even been completed.

They had offered chances in their 99-run stand – Rahul should have been run out on 27 after being utterly stranded mid-pitch, but two rushed throws were wild, while Ish Sodhi completely misjudged a catch which would have seen Kohli depart for 33.

Those mistakes were later rectified. Sodhi made up for his error by luring Rahul into one heave too many, holing out to long-off, while Guptill took a stunning diving catch to remove Kohli, flying full-stretch to claim a superb grab, centimetres off the ground.

However, Rahul had made 56 from 27 balls, and Kohli 45 from 32, and while their departures within seven balls of each other put the Black Caps back in the contest, Iyer had no concerns.

An equation of 53 runs from 30 balls was a tricky task, but the 25-year-old played some glorious shots to continually carve the required run-rate, and when left with 18 required from 12 balls, he and Manish Pandey only needed six to see India home. 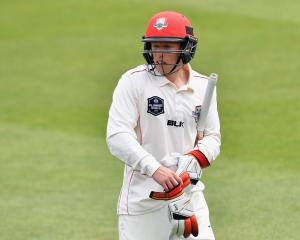 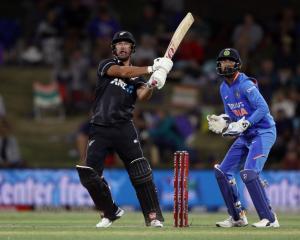 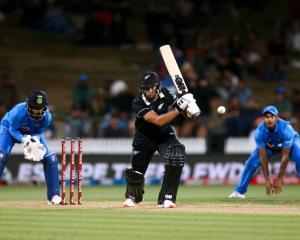