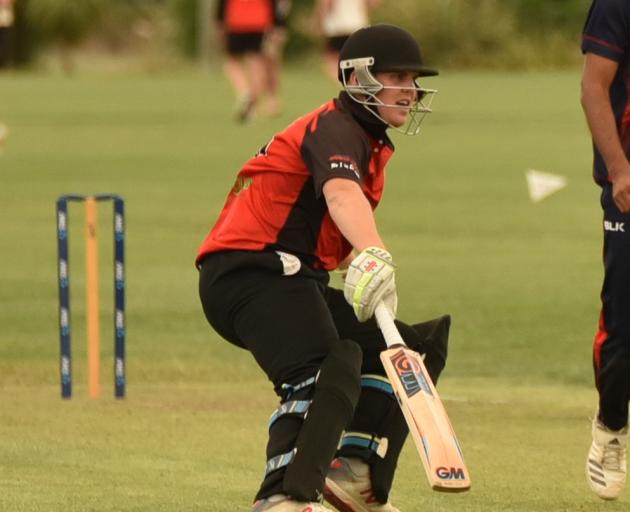 Liam Robinson looks for second run Photo: Karen Casey.
An unbeaten 128 from Charlie Robson helped lift Weedons to a three-wicket win over Cheviot in the Canterbury Country premier 45-over cricket competition on Saturday.

In other results, Leeston Southbridge were able to hold off a much improved Darfield by 10 runs at Darfield Domain.

Southbrook beat Lincoln by four wickets at Southbrook Domain, by chasing down Lincoln’s 198 and Oxford comfortably beat Sefton by 102 runs at Pearson Park.

In what was a high-scoring sixth round, Weedons looked to be up-against it on the new Cheviot pitch after wicket-keeper batsman Will Hamilton hit 113 for the hosts.

He and opener Ted Whelan, who made 53, put on 147 runs for the second wicket.

They were the main contributors as Cheviot scored 236 for six from their 45 overs.

Jack Henderson was the pick of the Weedons bowlers, taking three for 49 from his nine overs.

At 40 for two the chase looked to be getting away from the visitors until Robson came to the crease.

He put on 62 for the third wicket with opener James Richards, who added 43.

Weedons got home with 10 balls to spare.

Leeston-Southbridge held their nerve against Darfield in a tight encounter.

Leeston-Southbridge’s opening stand of 82 between Ben Chamberlain (37) and Joel Harden (45), who was playing his last game before moving to Wellington, proved the difference.

While the defending champions lost wickets consistently after that, they were able to scramble to 156 for nine, in spite of Tom Innes taking five for 37 from his eight overs.

An unbeaten 52 from wicket-keeper, Alister Collins kept Darfield in the hunt, he just did not get the support he needed from the other end as the asking rate kept creeping up and they eventually fell 10 runs short.

Leeston-Southbridge captain Toby Doyle said his batsmen found ways to get out and left probably 30 runs on the field as a result.

“The pitch was quite up-and-down but we restricted them well with the ball and got the key wicket of Henry Shipley.”

Darfield captain Mike Pauling said his team did not pace their innings well and did not get the contributions they needed from the top four.

He gave credit to Innes for his bowling into a stiff breeze.

Lincoln had handy contributions from their top order in making 198 all out against Southbrook.

Adam Coleman made 46, Nico Lerm made 43 while the only contribution of substance from the lower-order was No 9 Blake de Haan who made 39 off 25.

An unbeaten seventh-wicket partnership of 103 between Southbrook’s Jack Boyle (78) and Luan Blom (58) took the hosts to the target when they were in trouble at 99 for six.

Southbrook got home with more than nine overs to spare.

There is no premier cricket on Show Weekend, with the twenty20 competition beginning on November 23.