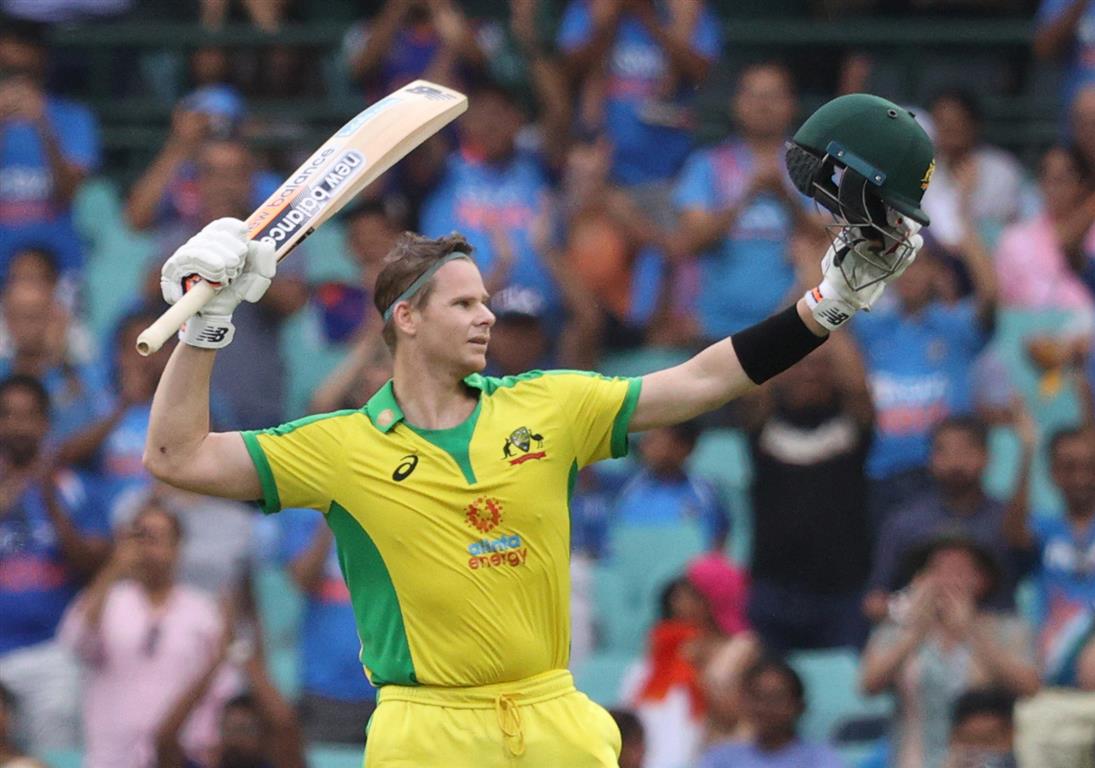 Australia's Steve Smith celebrates his century in the second ODI against India. Photo: Reuters
Consecutive centuries from Steve Smith have delivered Australia an ODI series victory over India, who suffered a 51-run loss at the SCG on Sunday despite a stirring chase led by Virat Kohli.

Smith backed up Friday's sparkling 105 with a masterful 104 in the second one-dayer, guiding Australia to a record-breaking total of 4-389.

Kohli, whose composed knock of 89 never looked like stopping until a diving Moises Henriques reeled in a spectacular catch at midwicket in the 35th over, created all manner of headaches for Australia.

India's skipper was well supported by KL Rahul (76), while Mitchell Starc was hammered for 0-82 from nine overs.

However, the hosts had far too many runs to play with and the game ground to another belated finish at 10.46pm AEDT.

Smith chipped in with two catches as India finished 9-338, ensuring Wednesday's series finale in Canberra will be a dead rubber.

"I didn't give any chances today (unlike on Friday). I felt good from ball one, was able to get myself in and go hard," Smith said.

"I tried to whack the ball a bit too hard in the IPL. I've started to try and hit the ball with a bit more finesse."

Australia's victory was soured by an adductor injury suffered by David Warner, who was rushed off for scans after a fielding mishap.

But Smith sounded another ominous warning that he could be in for a big summer, sapping the morale of India's bowlers as the temperature hit 40C.

The right-hander picked gaps with ease, shuffled around the pitch with typical abandon for the textbook and produced another spellbinding highlight reel to celebrate consecutive one-day tons for the first time in a decorated career.

There were countless parallels with Smith's previous mauling of the same attack at the same ground, which piloted Australia to 6-374 and a 66-run win in the series opener.

On Friday, Aaron Finch won the toss and shared a 156-run stand with Warner before Smith took charge of the contest.

On Sunday, Finch opted to bat and enjoyed a 142-run partnership with Warner before Smith marched Australia to their highest ODI score at the venue.

The gifted batsman would likely have completed Sunday's century in 61 balls if not for an untimely stumble from batting partner Marnus Labuschagne in the 41st over.

Smith ticked off the milestone during the same over, ripping off his helmet and kissing the badge before hugging his protege.

The former skipper fumed at himself soon after, having tried to get too funky while edging Hardik Pandya's delivery straight to Mohammed Shami, but the damage was well and truly done.

Glenn Maxwell recovered from a bouncer blow to the helmet and delivered another entertaining cameo, finishing 63 not out from 29 balls, while Labuschagne (70), Finch (60) and Warner (83) also scored freely.