Stars shine as Black Caps in the box seat 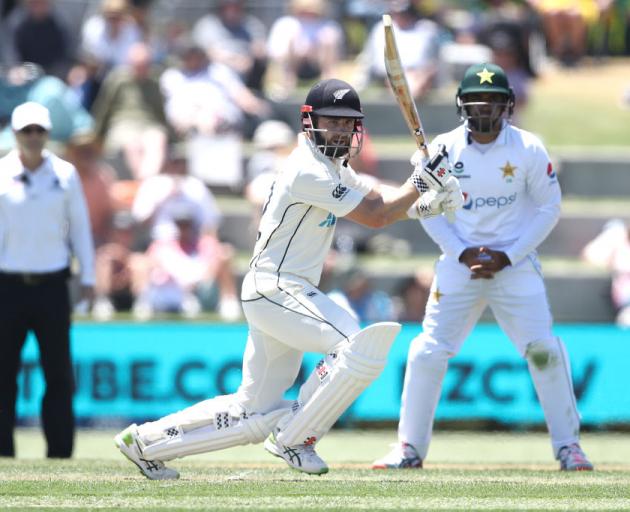 Kane Williamson of New Zealand bats during day one of the first test match in the series between New Zealand and Pakistan at Bay Oval. Photo: Getty Images
One of the fundamentals of leadership is not to tell anybody to do anything you wouldn't be prepared to do yourself.

When New Zealand discussed the approach they'd take if they lost the toss and were forced to bat, they would have talked about toughing it out, about making Pakistan's seamers bowl multiple spells with an ageing ball; they would have highlighted patience as not only a virtue but a prerequisite.

At 13-2, captain Kane Williamson and former captain Ross Taylor got together to demonstrate exactly what that meant.

At day's start, the sun was might have been shining, the crowd big and the mood festive, but the cricket was anything but.

This was hard-nosed, attritional, cricket; the furthest thing from a public holiday jolly.

It might have lacked highlights, but it didn't lack for quality.

Pakistan's seamers started beautifully and only rarely deviated from that standard.

Shaheen Shah Afridi might have got the early breakthroughs, but Mohammad Abbas was just as impressive, making a living on the fourth-stump line.

But we're slightly ahead of ourselves here. The action started, as it does so often in New Zealand, with a toss both captains wanted to win. A gleeful Mohammad Rizwan needed only a micro-second to announce his side would bowl. New Zealand are used to this.

Shaheen, whose baby face sits atop a body built for fast bowling, induced an edge in the air between slip and gully first ball of the match, but Tom Latham was not so lucky from the third.

It's not the first time Williamson has strode to the wicket in the first over of a test match, but it is the first time he's done it on his home ground in a Boxing Day test. It might not be pressure like Tendulkar faced every time he walked out at Wankhede, but most of the 6285 were here to watch him bat.

Pakistan knew he was the key, too. It can be the only plausible reason they reviewed a nonsense caught behind down leg appeal, even when the close-in fielder Abid Ali counselled bowler and captain not to.

At the other end, Tom Blundell was not perhaps commanding the same respect but he was getting Pakistan's full attention. After 29 balls of graft he pushed hard at Shaheen and Yasir Shah took a comfortable catch at third slip.

Blundell is a made opener, not a born one. The 121 he scored a year ago against Australia is just starting to look like an anomaly.

That door was ajar and Pakistan's attack looked equipped to charge through it with the out-of-form Ross Taylor striding to the wicket. He can be skittish in these situations and when he hit his first ball through square leg for four he went past Williamson on the scoreboard – who had been in for 10 overs.

The hour between drinks and lunch was gripping. The wicket might not have been lilypad green like Hamilton and Wellington, but it was green enough. More importantly, Pakistan's new-ball bowlers, Shaheen and Abbas were in the groove.

The problem when those two bowl in tandem, however, is that those who follow seem gentle by comparison. It went from looking like a 180-run wicket to one where 350 was par.

As it stands, New Zealand has a chance of gritting their teeth and going past that.

If they do, it will be because of the platform laid by their leaders.

Taylor scored 70 from 151 balls before Shaheen tempted him to follow his left-arm angle. By that time the pair had put on 120, the 10th time they have achieved a century partnership in tests.

Taylor's departure signalled Nicholls' entrance. He gave his customary chance early – Abbas made a mess of a simple catch at fine leg – but then looked comfortable and, compared to his skipper, carefree.

It took Williamson 154 balls to reach his 50. He nearly ran himself out early, his trademark back-foot punch rarely penetrated the inner ring and, as is his great skill, a couple of edges dropped just short of the cordon (and on two occasions, might have even carried).

He even found time to wave on a streaker who got uncomfortably close with a minimum of fuss.

He's a remarkable cricketer. One they're glad to call their own in these parts.