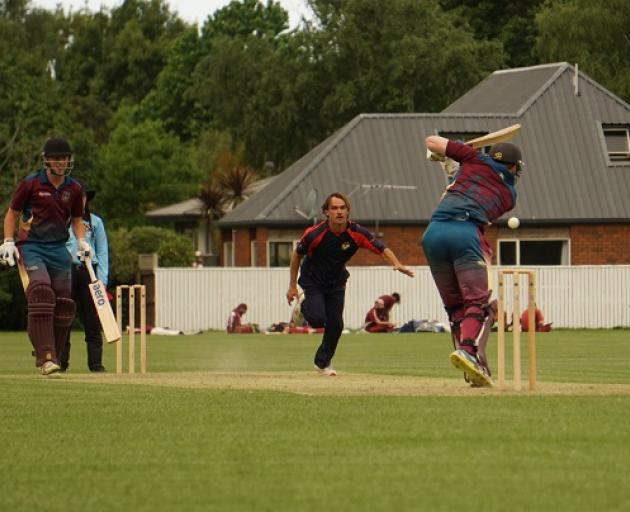 Ryan Wallace took 3/21 in a must win match for Sydenham against Burnside West.
Old Boys Collegians confirmed their spot in the premier one-day metro cricket semi-finals in style with a last-ball win over Lancaster Park on Saturday.

Sean Davey was the hero for OBC by scoring the two runs needed on the final ball of the match to give his side the slimmest of one wicket victories.

The win means OBC is one of three sides, along with Lancaster Park and St Albans, confirmed for the semi-finals later this month.

Meanwhile, Wins for Sydenham and East Christchurch Shirley mean they, along with Burnside West University, are in the hunt for the final spot this weekend.

Lancaster Park were first to bat at Elmwood Park and after the loss of two early wickets were carried by Oscar Wilson who scored an impressive 114 from 116 deliveries. He and Scott Duggan amassed 115 runs for the fourth wicket which helped them through to 242/10 from 49.3 overs. David Wakefield did the damage for OBC, taking four wickets and going for just 45 runs.

Openers Tom Taylor and David Wakefield got OBC's chase off to a bright start and at 226/7 in the 48th over they looked odds on to reach Lancaster Park's total. However, the loss of two quick wickets left OBC needing a further seven runs with just one wicket in hand. Davey showed nerve and was able to hit the two runs required off the final delivery to finish unbeaten on 61.

At Hagley Oval, St Albans went to the top of the one-day standings thanks in large to an unbeaten 112 from James Southby which helped them defeat Heathcote by 88 runs.

Batting first Saints got off to an unspectacular start to be 68/4, but a 95 run partnership between Southby and Sam Flavell steadied the ship and enabled them to get through to 289/8 from their 50 overs.

In reply, Heathcote was tracking well to challenge the total at 82/2 in the 17th over. However, with just four players making double figures Heathcote was bowled out for 201 in the 46th over.

At Riccarton Domain Easts kept themselves in the playoff hunt with a 26 run win over Riccarton.

Canterbury batsman Leo Carter was the only Easts player to score a half-century, but with eight players making it into double figures the side was able to amass a respectable 234 before being bowled out in the 48th over. Fraser

Campbell and Matt Munro did the damage for Riccarton taking three wickets each.

Openers Nick Kwant and Liam Bartholomeusz got Riccarton off to a bright start courtesy of a 72 run stand. However, they went onto lose their next four wickets for just 27 runs. A late stand between Jack Turner and Dominic

Opener Aditya Edekar got Sydenham off to a great start with 95 and with support from fellow opener Toby Mowat and no.3 Ryan Wallace the visitors found themselves flying at 171/1 in the 38th over. However, two crucial wickets from Matt Hay were able to start a collapse which saw Sydenham somewhat restricted to 244/8 from their 50 overs.

Sydenham struck early in their defence courtesy of Tom Agnew and Mitchell Gardner. Their tidy opening spells were then backed up by Wallace and Tim Johnston who took three wickets each and never let Burnside West into the game.