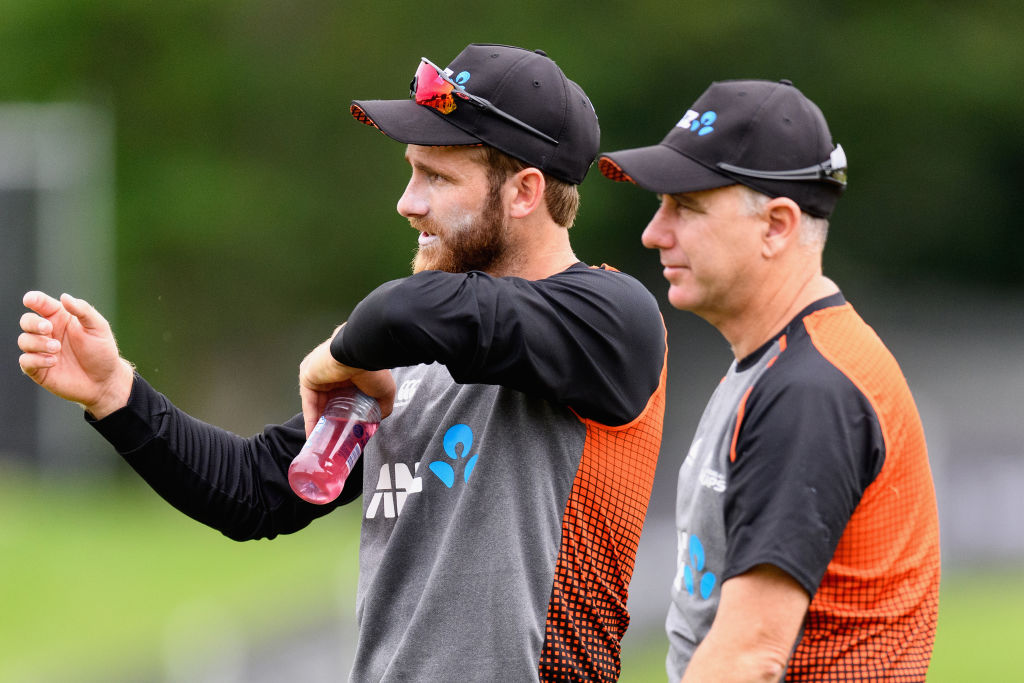 Black Caps captain Kane Williamson (L) and coach Gary Stead are chasing success across the Tasman. Photo: Getty Images
Recent results suggest the Black Caps have what it takes to topple Australia in their three-match ODI cricket series across the ditch, but a glance at history provides a more pessimistic outlook.

On form, the Black Caps have reason for optimism ahead of the series, which starts tomorrow in Sydney. They've just whitewashed a good India ODI team, while Australia have lost their last five one-dayers.

Additionally, the Black Caps have been bolstered by the return of their three best fast bowlers, while Australia's stars are slowing down at the end of a gruelling season.

In New Zealand, or at a neutral venue, the temptation would be to class the Black Caps as favourites, but with two games in Sydney and one in Hobart, a familiar problem re-emerges.

Australia haven't lost a game at home — in any format — since January 2019, while the Black Caps haven't won an ODI in Australia since 2009, a run of six losses. Their historical record is even bleaker; having never won an ODI series across the ditch, and just to pile it on further, remember what happened the last time the Black Caps visited Australia feeling confident about their chances?

To that point, Black Caps coach Gary Stead acknowledges his side "were beaten up pretty badly" in their three-test thrashing, but doesn't believe there will be any mental scarring from the summer.

"It's a different series; there are different guys over here with us who weren't involved in the test series. That's gone, it's in the past now, and we can look forward to the ODIs.

"We've played some really good ODI cricket over the past three or four years, and hopefully we can continue that."

However, while the Black Caps' recent ODI form is promising, and they have the luxury of a full-strength squad, the difficulty of beating Australia in their home conditions is the issue Stead recognises as his team's greatest challenge.

"Australia are never vulnerable at home, it's one of the toughest places to come and play in world cricket, You see their record and understand that's why they have that reputation. A lot of teams struggle away from home, and that's going to be our biggest challenge.

"What's happened in the past, we can't necessarily influence that. The more times we play Australia and have great games against them, hopefully the more we'll learn when it comes to the big picture. They're a great team, we respect them a lot, and ultimately sometimes they set a benchmark for us to try to aspire to."

Although a series win will be difficult, it's likely — and essential — the Black Caps will be far more competitive than in the test matches, with Stead hoping to give Australia much more of a contest.

"If we can be in the game for long periods, we can put pressure on Australia, and it will get to some stage of the match where one of the two teams will crack.

"We'll see who that is on Friday."