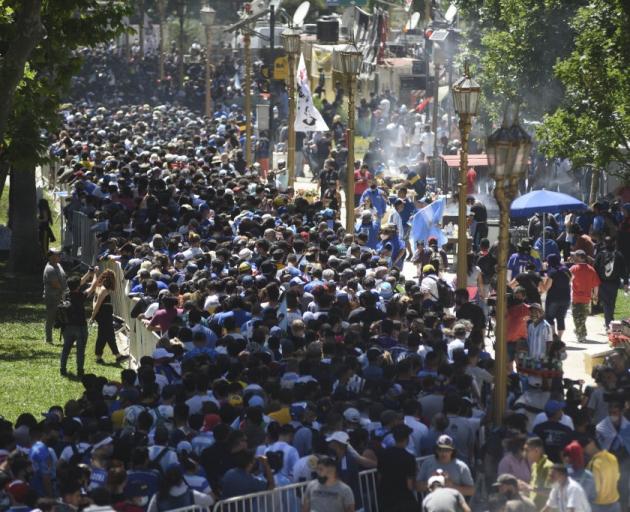 People flocked to the streets of Buenos Aires to mourn the death of Diego Maradona. Photo: Getty Images
Argentines in their thousands, wearing soccer jerseys and face masks, packed into snaking queues on the streets of Buenos Aires to pay their last respects to flawed football genius Diego Maradona - despite concerns around the spread of COVID-19.

The crowds, which some expect to reach a million people to see Maradona's casket after his death on yesterday, reflect the soccer star's status in the South American country, where he has almost cult following and is fondly known as "God".

"You have to be here. There was no way this wouldn't happen. Somehow this is Maradona too, breaking the rules," said Marcelo Gades, a 52-year-old employee, who was waiting to enter the wake with a rose in his hand.

"Argentina is Maradona, and Maradona is Argentina, with all the good and all the bad."

Argentina has recorded almost 1.4 million cases and 37,714 deaths from the coronavirus pandemic. The government imposed a strict lockdown in March and restrictions on schools and travel remain in place. New cases have been slowing in recent weeks.

Maradona's massive wake sparked some criticism on social media, especially as the government had limited the number of people who could attend wakes and funerals to contain the virus.

Rules had been eased in recent weeks to allow more access to cemeteries, though indoor gatherings in general remain tightly restricted.

While authorities had sanitizing equipment at the entrance of the palace, where people went through in procession to see the closed casket, many supporters crowded in front of the entrance and some were singing and drinking without face masks.

"So many people together to say goodbye to Maradona is a source of direct contagion of COVID," 55-year-old Argentine doctor Alberto Ugalde told Reuters. "I see that on the street people are crowded and even some without face masks."

"I understand the pain, given what an idol he is for us, but the health risks are high."