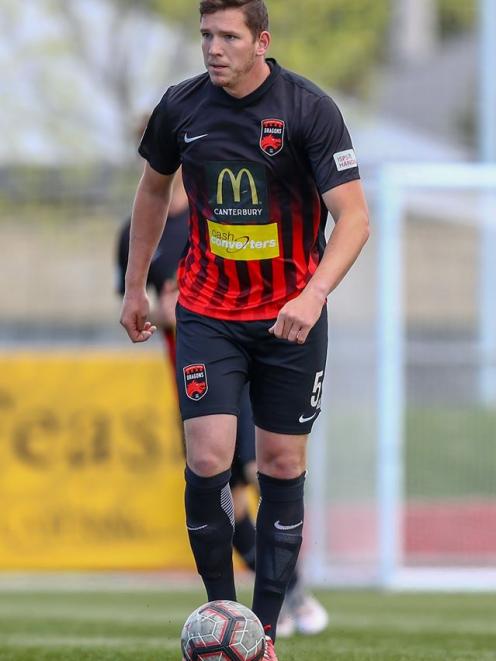 Tom Schwarz is hoping the Dragons can kick on to a play-off birth. Photo: Supplied
They may have just two wins from eight matches, but the Canterbury United Dragons start the year just one point off a semi-final spot in the ISPS Handa Premiership.

On Sunday, the sixth-placed Dragons have a chance to move into the top four at the halfway point of the competition when they host seventh-placed Hamilton Wanderers at English Park.

The 10-team competition has been dominated by favourites Auckland City and Team Wellington.

Said Dragons captain Tom Schwarz: “Some other results have certainly gone our way.

"If we can get a bit of momentum going we’ll be right in the playoff hunt. We’re looking to kick on.”

The Dragons have a new look this year under the guidance of coach Lee Padmore, following the departure of Willy Gerdsen. Schwarz said the side needed to gel this season.

“We knew it was going to be tougher, we knew we’d be fighting for every point and improving as the season goes on. I feel like we’re doing that.”

In their last match on December 20, the Dragons had a 2-0 win over Tasman at English Park, courtesy of second half goals from George King and Aaron Clapham.

“It was nice to finish on a bit of a high and to put together probably the most complete performance we have yet,” said Schwarz.

The centre-half admits the Dragons and the rest of the chasing pack are some distance off competing with the big spending Auckland City and Team Wellington.

But he says the top two sides aren’t unbeatable, particularly with the one-off nature of the play-offs.

First on their to-do list if they are to get in a position to topple the big boys is to secure three points against Hamilton.

The match kicks off at 2pm.