Lack of strike power could hinder Coastal ahead of cup final 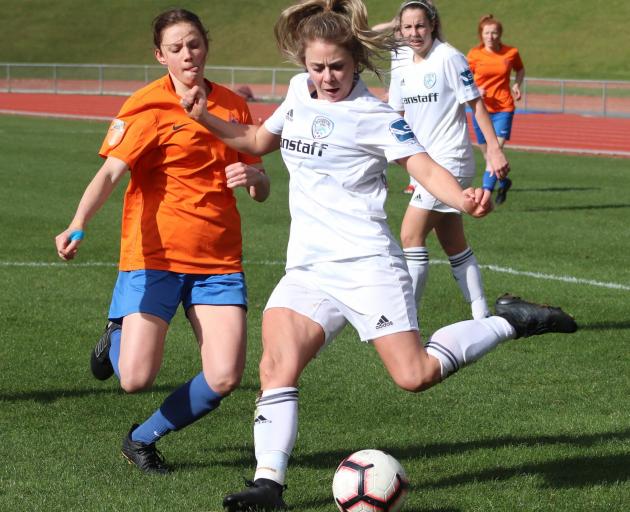 Mel Cameron is one of three Coastal strikers unavailable for Sunday's Kate Sheppard Cup final.
A depleted Coastal Spirit won’t let the number of absent players get in the way of their bid to win the top prize in national women’s club football.

Coastal will take on Auckland club Eastern Suburbs in the final of the Kate Sheppard Cup at North Harbour Stadium on Sunday.

Just one goal was required when they defeated Wellington United in the semi-final less than two weeks ago. They will be forced to work even harder for goals against Eastern Suburbs with none of their strikers available for the final.

Mel Cameron will be out due to suspension after receiving a second yellow card late in their win over Wellington. Meanwhile, Britney-Lee Nicholson is in China with the national women’s futsal team and Canterbury United striker Cody Taylor is unavailable.

“I’m absolutely gutted for Mel [Cameron]. To have the opportunity to play in the final taken away is heart-breaking,” said Coastal captain Chloe Jones.

Not much has been given away as to Coastal’s potential line-up, but a formation reshuffle is on the cards with no genuine striker options.

“We’re going to have to do what we do best and that’s work really hard,” said Jones.

To make matters worse, Coastal will also be without fullback Tahlia Herman-Watt, who is currently playing for the New Zealand under-19 side at the Oceania women’s championship in Rarotonga.

“The players in our team are strong – they won’t let it bother them. They don’t need motivating. They know what it’s like to win, they love winning and when they lose they’re certainly not happy about it,” said Coastal football development manager Gary Bennett.

If they can lift the silverware it will be just the fourth time a South Island club has done so since the national women’s knockout competition was established in 1994.

Coastal booked their berth in the final with a nail-biting 1-0 win in the capital. It was 0-0 after normal time, but Jones finally broke the deadlock 10min into extra time when her curling corner found its way into the back of the net. Coastal were then forced to defend their slender lead with just 10 players after Cameron was sent off.

Eastern Suburbs held off a determined challenge from Hamilton Wanderers to make the final.
•Kick off will be at noon. The match will be live on Sky Sport and will act as the curtain-raiser for the Chatham Cup final between Melville United and Napier City Rovers.