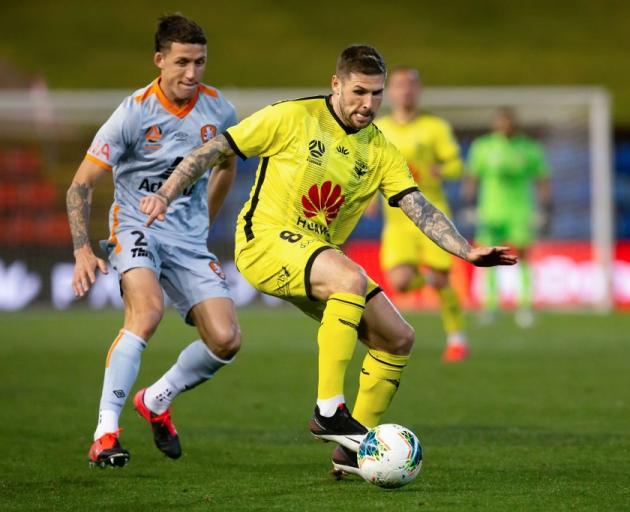 Wellington Phoenix forward Gary Hooper controls the ball during their match against the Brisbane Roar last night. Photo: Getty Images
The Wellington Phoenix have secured their place in the A-League playoffs and kept alive their chances of a top-two finish.

They had a 1-1 draw with Brisbane Roar at McDonald Jones Stadium last night.

A spectacular second-half Scott McDonald strike put Brisbane ahead, but fellow Celtic old-boy Gary Hooper squared the ledger for the Phoenix with eight minutes remaining to rescue a point for his side.

Wellington were comfortably the better team in the final third of the game and created numerous chances before Hooper's equaliser, which came after a Libby Cacace header had cannoned back off the post and into his path. Until then, they were thwarted in large part by an inspired goalkeeping performance from Roar custodian Jamie Young.

McDonald scored a superb opener on the hour mark, the veteran Brisbane attacker twisting free of two defenders in a tightly-congested penalty area before curling a superb left-footed strike past the despairing dive of Stefan Marinovic.

Hooper had a golden opportunity to square the ledger six minutes later but spurned the chance with the goal at his mercy after Cacace's low cross found him unmarked in the six-yard box.

Despite enjoying the majority of possession and out-passing the Roar, the Phoenix were unable to find the net until Cacace – who was again a standout – headed onto the base of Young's post, before a visibly hobbling Hooper had the composure to stroke home the rebound. Substitute Jaushua Sotirio had two late chances to seal a Wellington win, but found his radar off both times.

Young was his side's saviour on numerous occasions, most notably in first-half added time, when he clawed away a goal-bound Hooper lob. Earlier Young tipped a Steven Taylor header over his crossbar and parried an Ulises Davila drive behind for a corner. He also turned away a Reno Piscopo piledriver shortly after McDonald's opener.

McDonald could have opened the scoring in the first half but a superbly-timed sliding block from Te Atawhai Hudson-Wihongi snuffed out his goalbound effort. While Brisbane fashioned a dozen first-half shooting chances, Marinovic was called into action just once, smartly saving Dylan Wenzel-Halls' rising effort from eight metres.

Hudson-Wihongi was one of three changes to Wellington starting side, replacing the suspended Luke DeVere at centre back. Callan Elliot earned a second start in three matches at right back in place of Louis Fenton while Australian attacker Reno Piscopo was rotated into the side with Callum McCowatt dropping to the bench. Both Hudson-Wihongi and Elliot put in solid displays and firmed their case for inclusion in the next game. Having served their respective four-match bans, neither Tim Payne or Oli Sail were included in the match-day squad.

While the Phoenix will be satisfied with ensuring post-season football for the second straight year, they have collected just five of a possible 15 points since the resumption of the competition and have lost some of the pre-Covid momentum they had built.

Wellington now have an eight-day break before meeting Newcastle in their last regular season match next Thursday. They sit two points behind second-placed Melbourne City, who have a game in hand, with Brisbane a further two points back in fourth spot.