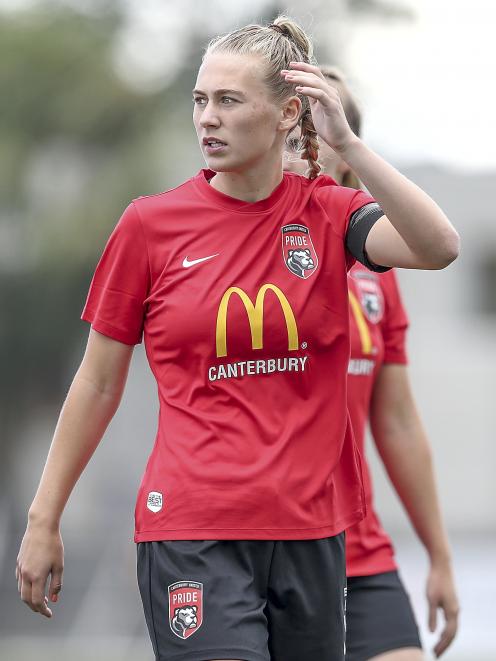 Rebecca Lake, 20, will captain the Pride in this year's grand-final after the departure of White Ferns star Annalie Longo. Photo: Martin Hunter
One thing will be very different for the Canterbury United Pride when they compete in their seventh straight National Women’s League grand-final at English Park on Sunday.

The Pride will be looking for their fifth title in seven years when they play the Northern Lights in a replay of last year’s final.

However, if they are to lift the crown this campaign it could arguably be their finest achievement due to doing it without Annalie Longo - who has been at the heart of every one of the Pride’s title-winning campaigns since moving south from Auckland.

Longo’s first season for the Pride was in 2013, which saw them win the grand-final in their first appearance. A year earlier she helped Auckland to the final and then played in every final through to last year, when the Pride defeated Northern. However, this year the Pride have been without the star since their opening round win over Capital in September, after she signed with W-League side, the Melbourne Victory.

Pride coach Alana Gunn says in recent years there have been plenty of outsiders who believe the side’s success has come purely due to Longo’s involvement.

“Since flea [Longo] moved to Christchurch we’ve been in the final every year, so there’s no doubt she’s been a very big part of the success that we’ve had, but it’s quite a nice feeling to know that we did do it without her,” said Gunn.

Longo captained the Pride in their 6-0 win over Capital on September 15 before departing for Melbourne. Since then the Pride have maintained their position at the top of the league, losing just one match to Northern last month.

“I think it’s a great achievement. It would have been quite easy to use it as an excuse.” 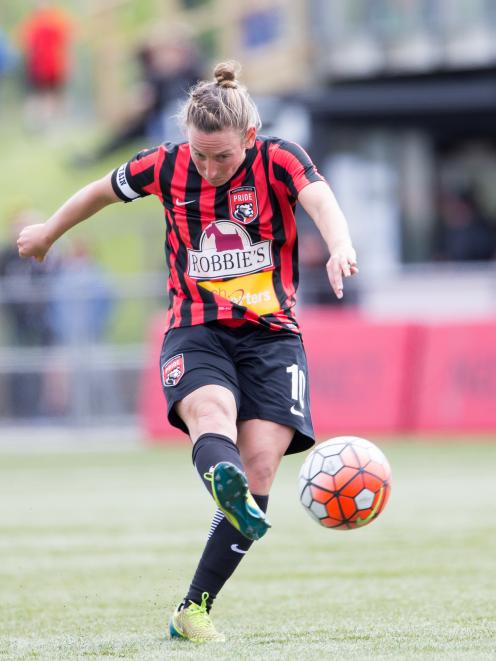 Annalie Longo started the season as Pride captain, but is currently playing professionally for the Melbourne Victory. Photo: Supplied
Longo’s opportunity to play professionally in Australia also left the Pride without a captain. However, Gunn says after a conversation between her and Longo it was an easy decision to hand the captain’s armband to central defender Rebecca Lake.

The 20-year-old defender made her Pride debut in 2014 and like the rest of her team learned of Longo’s move not long before she departed.

“I never doubted the team. We’ve got a quality side which we’re proving with how well we’ve gone this season,” said Lake.

“The one thing I was worried about when (Longo)v left is because she’s such a smart player I knew I had to listen a lot more in trainings and really get down the tactical side of the game because if there were younger ones who needed to ask questions I had to have the answers ... that’s been one of the biggest challenges for me.”

Lake also says her new role is made easier by the number of natural leaders among the squad who have kept intensity at trainings high and made the younger players in the squad feel at home.

“If you ask the girls the reason why they’re playing and why they give up so much time for this team, it’s because they’re wanting to play for their family and the region, and they take a lot of pride in that,” said Lake.

“They’re turning up to every training because they want to, not because they have to and I think that really differs us from other teams.”

The Pride have won 10 of their 12 league games this season, drawing once and losing once. They have scored 36 times - more than any other side - and conceded just eight goals, which has them tied for the best defensive record with Northern.

The two meetings between the Pride and Northern this year saw Northern win 2-1 at English Park, while a 0-0 draw was played out in Auckland earlier this month. Last year’s final between the two clubs saw the Pride win 3-2 in extra-time.