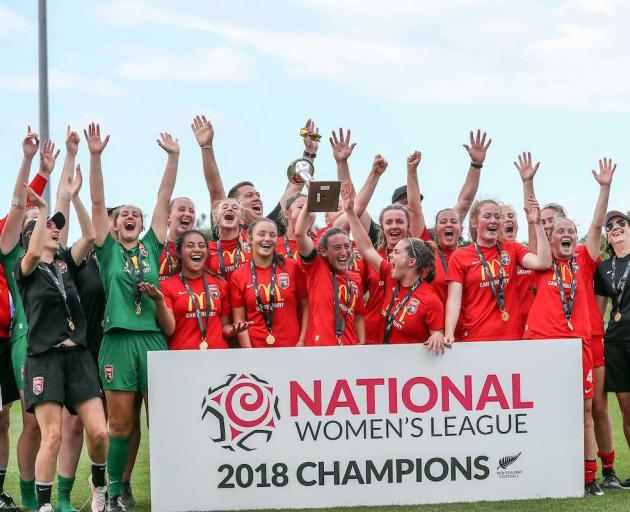 The Pride have started their National Women's League defence with back to back 4-0 wins.
The early pace in the National Women’s League is being set by Canterbury United Pride and Southern United after the South Island pair both picked up second consecutive wins in match week two.

The defending champions Pride had too much quality for their opponents yet again, this time sweeping aside Central 4-0 during the match held in Christchurch on Saturday.

A youthful Central line-up was relishing the opportunity to take on some of the best players in the country. But they were soon behind after kick-off with Britney-Lee Nicholson pouncing to give the Pride.

The Central defence did not fold though and restricted the hosts to just one more goal before the break, this one coming from Nicola Dominikovich mid-way through the half. Tahlia Herman-Watt made it three soon after the restart but the Pride had to wait until late on for a fourth through Jayda Stewart.

Central’s cause wasn’t helped by an injury to goalkeeper Brooke Bennett, who had been outstanding until being forced off with around 20 minutes remaining.
Canterbury coach Alana Gunn had plenty of praise for the visitors and admitted her own side were not quite at their best.

“I thought Central came out firing and really made it hard for us to get out of our middle third and create chances, so credit to them for the job they did defensively,” she said.

“I thought our girls were a bit poor in some decision making in the first half which made it a bit hard for us to retain possession but we did enough to get the three points.”

Central counterpart Barry Scullion was pleased with the work rate of his side and feels there is more to come.

“We had a tough start in conceding a goal quite early but I think the girls composed themselves really well and we came into the game a little bit then, we worked really hard,” he said.

“It’s tough because a lot of our girls haven’t played together and I think we’ll get better as the season progresses.”
Southern were made to work hard to take maximum reward from their trip to WaiBOP, leaving it late to finally secure a 1-0 win in Cambridge.

Both sides had chances to win a hard-fought encounter but were finally separated with only five minutes on the clock, Amy Hislop keeping her composure to slot home a penalty and maintain Southern’s perfect start.

The early form of Canterbury and Southern means their title rivals can’t afford many slip-ups so the Lights will have been pleased to emerge unscathed from a tricky test against Capital on Auckland’s North Shore.

The visitors were in need of the points too after a comprehensive loss to Canterbury last week but remain without a win after falling 2-0.
Both goals came from the boot of Chloe Knott, who put Northern in front just past the half-hour mark and made it two from the penalty spot on the stroke of half-time.

Canterbury have the bye this weekend while Southern will be presented with the opportunity to claim the outright lead while the likes of Northern and Auckland will be looking to make up ground on the early leaders.