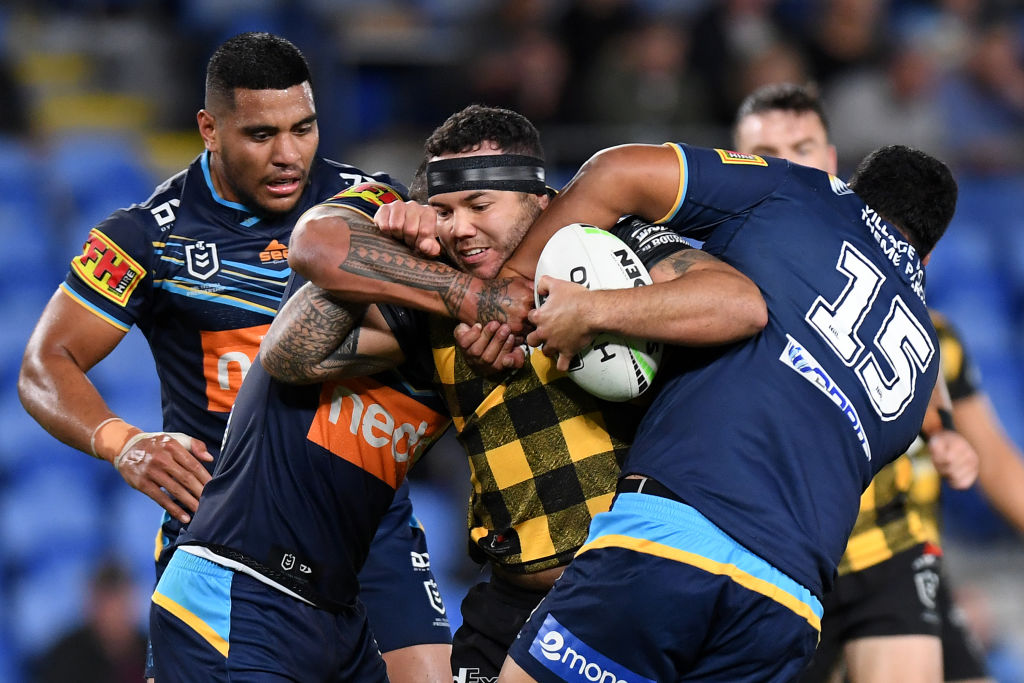 The Warriors' Jazz Tevaga is caught by the Gold Coast defence. Photo: Getty Images
The Gold Coast Titans have won a rare home game after a gutsy 16-12 win over the Warriors.

But it didn't come without controversy as fans erupted over a disallowed try just before halftime. Channel 9 commentator Phil Gould slammed the decision as "disgraceful".

The Warriors, wearing the divisive "bush shirt" jersey had tongues wagging, but the side were desperate to go back-to-back in the first half, scoring twice in the opening 10 minutes.

While it looked like it would be a long night for the hapless Titans, the Gold Coast dug deep and the Warriors were unable to trouble the scoreboard again.

The Titans scored next but then rode their luck for the win with Sam Stone scoring in the 47th minute after Tyrone Peachey knocked the ball back as it bounced over the dead ball line in a freakish play, while Beau Fermor scored the winning try when Warriors half Blake Green was unable to knock the ball dead in the 74th minute.

The Titans' victory is the club's third for the season, just one off its 2019 tally of four wins.

But it might have been different had the Warriors been awarded a try 10 minutes before halftime.

The Titans' Jamal Fogarty went back to clean up the ball and got his hands to it before dropping it as the Warriors' loan player Jack Hetherington put on the pressure.

Fox League commentator Steve Roach said he thought it would all come down to the grounding but Bunker official Jared Maxwell believed that Hetherington had denied Fogarty a shot at the ball.

"I reckon that's wrong, he had two hands on the ball and lost it – what are you supposed to do?" Roach said.

Corey Parker said: "It was play on for mine, he wasn't to know the ball wasn't in his arms, he was going to make a tackle once the ball had left and then he was going to score a try, Gold Coast Titans let off the hook".

Braith Anasta agreed it should have been "play on" and said "the Bunker got it wrong".

Greg Alexander added: "In slow motion, it looks worse but at normal speed, Hetherington's allowed to challenge for the ball".

But none went as far as Gould, who lashed the call in a series of tweets.

"That is a disgraceful call. The game is not in slow motion. That is just horrible," he wrote.

"The referee got the call right. He signalled try. He didn't need to refer it. Maybe check grounding. Challenge from Hetherington was fair in normal course of competition for possession. The Bunker gets it wrong because now they apply a criteria totally devoid of common sense," he continued.

"He is going to tackle him. What a poor decision. What are you supposed to do. Seriously we look for reasons to not award tries," he tweeted.

It was the turning point in the game as the Warriors were unable to challenge the scoreboard after the break, allowing the Titans to claim their first win at home since last April.

Warriors coach Todd Payten said he was "very disappointed" after the 12-0 start, but took the Bunker decision on the chin.

"I didn't agree with it but if I was on the flip side of that in the other box, of course I'd agree with it," he said in the post-match press conference.