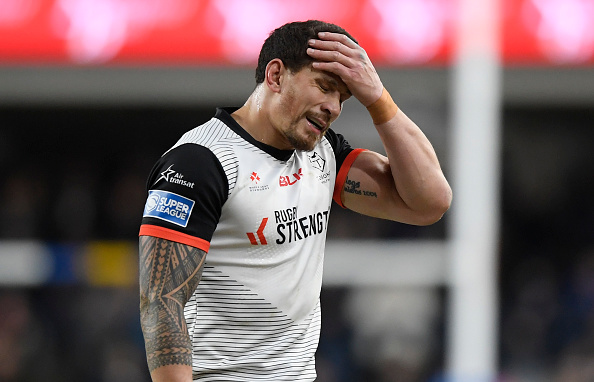 Williams, 34, signed with the Wolfpack on a two-year deal reportedly worth $10 million shortly after the All Blacks' failed Rugby World Cup campaign in Japan late last year - but like most sporting competitions around the world, the Super League has been forced into a hiatus by the Covid-19 pandemic since.

The league shut down in mid-March but is hoping to restart soon.

The Mirror is reporting that Williams and six of his overseas-based Wolfpack teammates have been stranded abroad, as their initial six-month UK visas have expired.

Though talks with the Rugby Football League and Super League are ongoing, Wolfpack owner David Argyle told the newspaper he fears the club's continued visa issues could mean the club wouldn't be able to complete the rest of the season.

According to The Mirror, no progress has been made after the Home Office told the club they couldn't "deal with them directly".

"This has been going on for three and a half years now and this Covid situation has exacerbated it," Argyle told the newspaper.

"I'm not blaming anybody - I can understand the bureaucratic position and we are only a very small issue for an organisation like the Home Office.

"But we've come to a crunch point now where it needs to be resolved."

The club have recruited a number of high-profile players and staff for their debut season in the top flight - including coach Brian McDermott.

"It's always been a big issue for us and it hasn't been resolved, and if it isn't resolved now then I don't see any way we can participate in the rest of this season," Argyle told The Mirror.

"It's been suggested to us that we could loan young players from other clubs, but we're not here to make up the numbers and we never have been. We didn't hire Brian McDermott as coach to do that.

"We joined this competition in the belief that we would have the full support of the RFL - and ultimately success in resolving this visa issue."

Australian media outlets are reporting that the NRL could be an option for Williams, who started his professional sporting career as a teenager with the Bulldogs, and has been heavily linked with a return to the league over the past three years.

With the player signing deadline only on August 3, Williams and teammates - including Chase Stanley, Josh McCrone and Bodene Thompson - could yet link up with NRL clubs, with the mandatory 14-day quarantine period in Australia the biggest potential obstacle.

Williams made a less than impressive return to the 13-man code, with the Wolfpack failing to win a single one of their six matches before the coronavirus pandemic brought the Super League to a grinding halt.