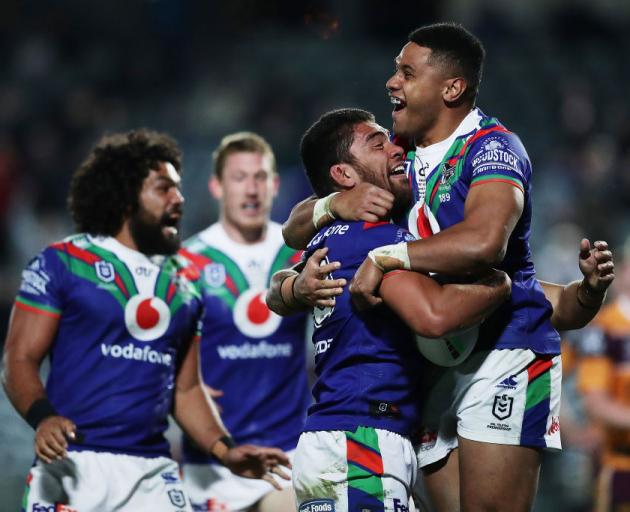 The Warriors celebrate their victory over the Brisbane Broncos. Photo: Getty Images
The Warriors have won the Battle of the Bottom to show that their spirit is well and truly alive, even if other parts of their game are not so healthy.

The nomad Warriors piled more misery on Brisbane with a 26-16 victory on the Central Coast, handing the glamour club their sixth straight NRL loss.

Ken Maumalo, among three players who want to return home early, was among the Warriors' stars, as they powered home with an impressive second half against a collapsing Broncos effort.

The Warriors' victory came without suspended captain Roger Tuivasa-Sheck, while they lost playmaker Kodi Nikorima to a head injury in the opening minutes.

The result gave interim coach Todd Payten his first win in charge of a first grade side, and the Warriors their third win of the disrupted NRL season.

There were so many crucial moments in the second half, including captain's challenges which went for and against the Warriors in front of about 2500 spectators.

When Peta Hiku let an Anthony Milford bomb bounce, gifting a try to Herbie Farnworth, the Warriors looked in trouble.

But hooker Wayde Egan came to the rescue, ripping the ball free of two tacklers to score a try which gave the Warriors an 18-16 advantage. It was all the Warriors in the final stages.

No one could complain about the entertainment, and that was before the game had even started.

The drama surrounding Brisbane's horror run of results included a claim by the club's greatest player Wally Lewis that the current squad was divided over pay.

Not to be outdone, Warriors owner Mark Robinson entered the fray during the week, effectively packing the bags for Blake Green - who was an increasingly dominant figure in the match - and Gerard Beale at the end of the year.

Neither side will go close to troubling the NRL trophy engraver on this form, but it was a captivating battle between two desperate sides.

The Broncos dominated possession in the first half but led by just 10-6 after a 39th minute try to Maumalo gave the New Zealand side the boost they had been desperately but ineptly chasing.

Maumalo and Chanel Harris-Tavita had bombed a try minutes earlier, but with Gerard Beale providing a sharp pass, they made amends this time.

Brisbane were never convincing but had taken a 10-0 lead through tries to flying right wing Xavier Coates.

The second seemed to predict a frustrating night for the Warriors, who gifted Coates the ball when in sight of the Brisbane tryline.

With giant Broncos prop Payne Haas setting the early tone, Coates also scored in the eighth minute, when their disorganised attack suddenly sharpened and they created an overlap for the wing.

The Warriors had already lost Nikorima at this point. The little five-eighth had advanced to confront big Tevita Pangai jnr and suffered a head clash, his head also smacking into the ground.

Despite their awkward attack Brisbane looked in the box seat to set up a victory, until Maumalo's late first-half try changed the mood.

And it was the Warriors who came out of the blocks fastest in the second spell, and they carried on to a stunning win.