Warriors on the market again amid boardroom turmoil 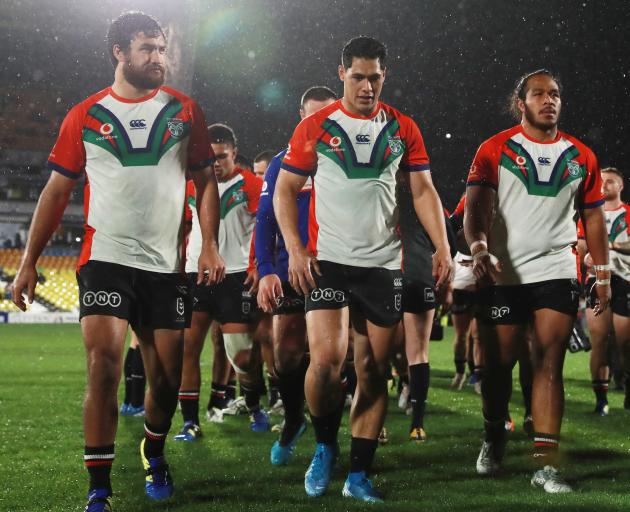 It's been a rough year for the Warriors, on and off the field. Photo: Getty Images
The Warriors are back on the market as a bitter boardroom dispute threatens to tear the floundering club apart - a mere 15 months after it was sold to its current owners.

The Herald understands that the relationship between Autex Industries and the Carlaw Heritage Trust - the two parties involved in the joint venture that own the NRL club - has completely broken down, after months of simmering tension.

In practical terms, it means they will be unable to work together anymore, with one observer commenting that the chances of another board meeting taking place are "less than zero".

Negotiations are underway, with Autex CEO Mark Robinson confirming to the Herald that they are bidding for full ownership of the Warriors.

"We are currently in negotiations with the Carlaw Heritage Trust around ownership of the Warriors," said Robinson.

"Our decision to bid for full ownership is based on doing what's in the best interests for the future of the club, the players and rugby league in New Zealand.

"For us, it's about the real passion we have for the club and the game. We want the club to reach its full potential. We've been at the games alongside the fans for 25 years, rain or shine, and we believe in the Warriors. The last thing we want is for this to cause any disruption to the club, the great people behind it, and its stakeholders and we're working hard to move through negotiations as smoothly as possible."

The most likely scenario is that Autex buys out the CHT (who have a majority shareholding of 67 per cent) but it may not be a straightforward process and it's not out of the question that a mediator could be called in to assist with negotiations.

At the end of a highly disappointing season, the bitter feud is the last thing the embattled club needs.

There are different views on the perceived value of the club, which was purchased for an estimated $16 million from former owner Eric Watson in April last year.
The club had previously been valued at between $10 and $13 million by an independent auditor.

It could lead to a shortfall of between $2-$3 million, for the party, likely to be the CHT, that sell their stake in the club.

Watson drove a hard bargain, and it's understood the NRL franchise was virtually bereft of working capital when the new owners took over, which required further investment.

Autex managing director Rob Croot is the chairman of the Warriors, with company owner Robinson their other representative on the board.

CHT chairman Cameron McGregor is the Warriors' deputy chairman, after stepping down from the top role last December.

The Auckland Rugby League, which is the sole beneficiary of the CHT, issued a memorandum on Friday, advising the clubs of a special meeting next Thursday to discuss the situation.

"The ARL Directors would like to call a meeting to discuss the possible changes to the current ownership of the NZ Warriors and to present all facts related to our current position as part owners of the NZ Warriors," said the notice. "All club chairs are invited to this meeting."

After months of negotiations, the Carlaw Heritage Trust and Autex Industries purchased the club off longtime owner Watson, fending off a rival bid from a North American consortium headed by former Hawaiian politician Richard Fale and including current and former NFL players.

CHT has a 67 per cent shareholding, with Autex retaining the other 33 per cent. There are four CHT representatives on the board, two Autex representatives and one independent.

However, the terms of the joint venture that were negotiated means that minority shareholder Autex essentially have equal voting rights around the boardroom table, which has led to stalemates on several issues, as a 75 per cent vote is needed to pass resolutions.

There have also been philosophical differences on the future and vision for the club, the amount of investment, and where that investment should be directed.

There has also been strong disagreement on the degree of alignment the NRL club should have with the local game, and the best way to produce, nurture and retain local talent.

One local club chairman, who declined to be named, said that the clubs had been told that money and benefits would flow into the local game as a result of the purchase, but that has not happened.

"There needs to be some accountability", he said. "If [the Carlaw Heritage Trust] have lost two or three million, then heads have to roll. That money should have gone into the local game, where it is desperately needed."

Compounding the current situation is the Warriors' difficult 2019 year, which will result in a significant financial loss, well into six figures. It's not unusual for the club to have a deficit or struggle to break even, but this season has been more pronounced, with crowds well down, along with increases in staffing costs.

Clubs were told earlier this year that the Warriors would need more investment.

There were early signs of possible friction last December, when McGregor stepped down as chairman of the Warriors, with Croot, managing director of Autex, taking on the top position.

McGregor had led the bid for the Warriors, as chairman of both the ARL and the CHT.

But on December 15, his switch with Croot was confirmed. At the same time, McGregor also resigned from his elected position as ARL chairman, though at the time he said it had always been his intention.

Croot declined to discuss the current situation on Saturday, saying that he "won't comment on speculation".

When contacted by the Herald, McGregor said that all discussions at board level are confidential and he had no comment to make.

"Obviously there are shareholder discussions happening which I am aware of and from my perspective, we need those discussions to conclude as soon as possible in the best interests of the club," said George. "My priority is to protect the staff, players and stakeholders and make sure there is stability for the club."

ARL Chairman Shane Price painted a bright picture, saying in a text message that the purpose of Thursday's meeting was "to update the clubs on the relationship between the ARL and the Warriors and it's never been better. Grassroots in the ARL's priority and coupling this with the Warriors desire to assist makes for a bright future."