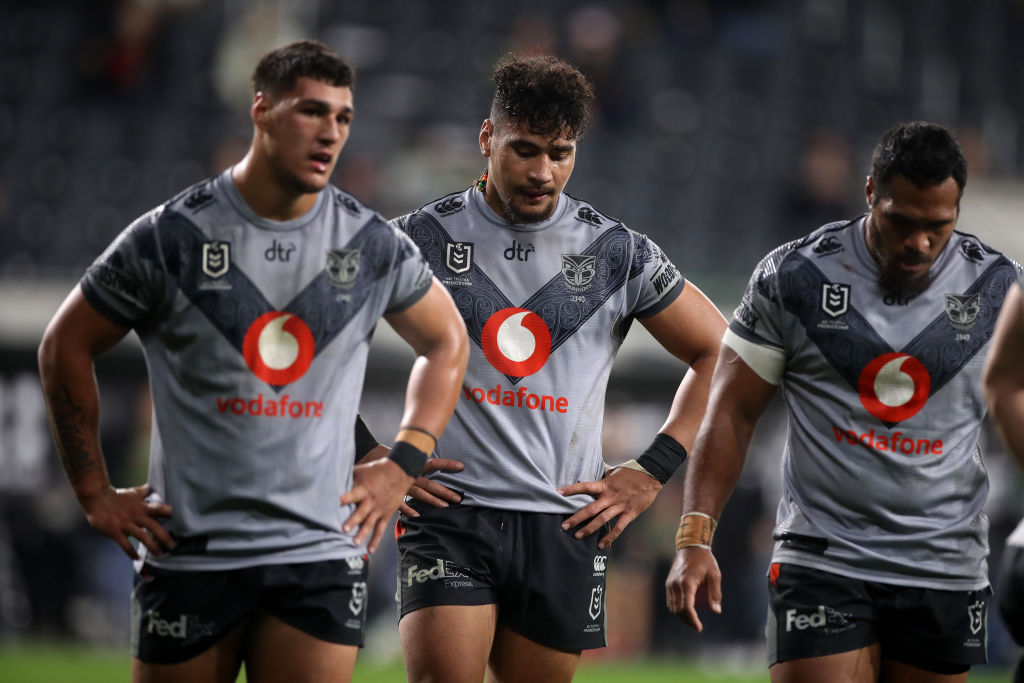 The Warriors crashed to a heavy defeat against the Rabbitohs. Photo: Getty
A few more nights like this, and Stephen Kearney's reign as Warriors coach will be in serious trouble.

The Warriors crashed to a 40-12 defeat against South Sydney and the horrible truth for the Auckland club is that the Rabbitohs weren't actually that good.

Kearney's side found incredible ways of blowing tries in the first half, and carried on their merry way in the second when Peta Hiku spilled the ball over the line, and Karl Lawton did the same close to it.

The Warriors weren't helped by injuries: prop Lachlan Burr was an early HIA casualty, returning wing David Fusitu'a failed a head assessment after a controversial 35th minute incident, and Eliesa Katoa limped through a lot of the game.

Trailing 22-6 at halftime, any hope of a comeback came to an abrupt halt as Souths hooker Damien Cook took control with two quick tries resulting.

The Warriors lost their shape and purpose in the second half. Their two victories this season have offered false hope against heavy defeats. It is hard to see where they are making real progress and they failed to put pressure on the Rabbitohs' error-ridden game.

A stunning Latrell Mitchell pass on halftime brought order to a chaotic first spell. The Rabbitohs were down to 12 men at the time, with Cody Walker in the sin bin. But it was Souths who created the overlap.

With the Warriors probably expecting an Adam Reynolds field goal attempt, Mitchell hit the line on the left and threw a long cut out pass which gave wing Alex Johnston a free run to the line.

At 22-6 down, the Warriors were in dire straits.

They mainly had themselves to blame through blown try chances and a late hit on kicker Reynolds, from Karl Lawton, which gave the Rabbitohs a wonderful attacking position.

They turned down the simple penalty and a bit of Cody Walker magic, a grubber kick under tackle pressure, produced a try to Braidon Burns who made a wonderful pick-up.

The Warriors had started so well when good work from Adam Blair and a wonderful looped pass from Blake Green put Fusitu'a over.

Fusitu'a should have had another in the half but he muffed it, under a swinging arm tackle from Mitchell which could have been penalised and left the big wing dazed and requiring a head assessment which he failed. It was a crucial moment, with the score at 18-6.

The blown first-half chances will haunt coach Kearney. With the line open, a pass from Peta Hiku to Gerard Beale found Dane Gagai instead. It led to a Reynolds try for the Rabbitohs, with Nikorima sent to the bin for a blatant flop.

How Tohu Harris missed out on creating a try from a big overlap or scoring it himself, midway through the first spell, is anyone's guess. It was that sort of game.