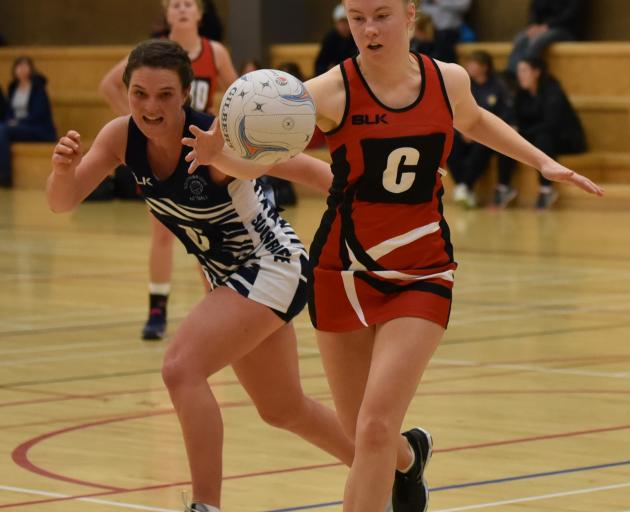 Lincoln A centre Madeleine Walker, right, beats her Southbridge oppositeBeth Williamson to the ball. PHOTO: Karen Casey.
Lincoln A and Greenpark B are pondering a combined training run on Thursday night to help each other win their respective Selwyn premier netball semi-finals on Saturday.

Lincoln A beat Southbridge A 71-37 in a winner-take-all contest at the Lincoln Event Centre on Saturday to claim fourth spot and earn the right to play top qualifiers Broadfield A.

Greenpark A eased past Greenpark B 50-36, and will play each other again in the other semi-final.

Lincoln A coach Dawn Dalley and Greenpark B player/coach Mechelle Barltrop said a combined training run could be beneficial for both teams as they try to prevent Greenpark A and Broadfield A meeting for their second straight final.

“When we have pushed the top teams. We’ve done it with a fast start so we’ll need that against Broadfield on Saturday,” Dalley said.

Lincoln A got within two goals of Broadfield A in a 55-53 loss in round two.

“The fact we had a good win against Southbridge and we’ve pushed the three other teams at times this year shows we can do it if we play well enough,” Dalley said.

Greenpark B will have to be at their best against their clubmates. “We have a mental block with Greenpark A in the fact that they are the only team we haven’t beaten all year,” Barltrop said.

“Some of the girls may be struggling with self-belief that they can beat them.”

Greenpark A coach Zaylie Sullivan said she would not be taking her club’s B team lightly, in spite of beating them three times this year.

Broadfield A coach Yvonne Crichton-Hill said she was happy with how her team played against Prebbleton, as she gave all 11 squad members time on court.

She said after losing the final to Greenpark A last year when they were favourites, she is not taking anything for granted against a Lincoln A team with strong combinations but a limited bench.