Cran Dalgety and Nathan Purdon are set to make an impact on tonight’s Forbury Park meeting with a small but select team.

Talented 3yr-old Gemma Mac will get few better opportunities to notch a win than in race 7.

If Gemma Mac can produce a similar run to her effort three starts ago when running second to Bettor’s Heart in the smart time of 2min 42.9sec for
2200m, she will be incredibly tough to beat.

“Her form has improved the last three or four days with the way Bettor’s Heart went at Menangle last weekend,” Dalgety said.

“Without being overconfident, she does look pretty hard to beat on paper.”

Gemma Mac has not had a trial or workout since returning to Canterbury last month following an Auckland campaign.

That is a slight concern for Dalgety, but he is still confident his filly is fit and ready to run well.

“We are getting her ready for a Sires Stakes heat next week and she will improve from having this fresh-up run. But if she gets a reasonable run she should be hard to beat.”

Though Gemma Mac drops significantly in class, she will still need to be on her game.

Delightful Deal looks the hardest horse for the Canterbury filly to beat.

The Nathan Williamson-trained 4yr-old was third behind Burlington in a stronger race at Ascot Park on Sunday.

Delightful Deal was rated the $2.80 fixed-odds favourite behind Gemma Mac ($1.70) when race 7 opened for betting on the TAB last night.

Chevron Flies will be out to repeat her impressive debut win at Forbury Park when returning to the track for the second time for race 10 tonight.

The 3yr-old cleared out to win by four lengths before going fair races in her next two spring starts.

Purdon and Dalgety have given Chevron Flies a trial at Rangiora ahead of her resumption tonight and they were pleased with her effort for second.

They would have liked to have given her another hitout before lining her up at the races, but tonight’s 1700m fillies’ and mares’ race was too good to miss.

“Another trial would have been ideal, but this looks a perfect race for her so we didn’t want to miss it,” Dalgety said.

“With her rating, the distance and the draw it all looks in her favour.

“I am a little bit wary about not having another trial, but she should still go a very good race.”

The Regan Todd-trained filly has the advantage of starting from barrier 1.

Chevron Flies opened the $1.55 favourite ahead of Champers ($5) in the fixed-odds win market.

Dalgety, Purdon and Orange will combine for the final time tonight with Pocket Watch in race 11.

The He’s Watching pacer will not have the same kind of favourable front-line draw to work with that his stablemates do when he starts from barrier 2 on the second line.

However, that should not stop Pocket Watch.

“He has had some time out and has improved a lot since coming back in,” Dalgety said.

“The draw is probably ideal for him. He will be out of the early burn and he last a lot of speed to finish off.” 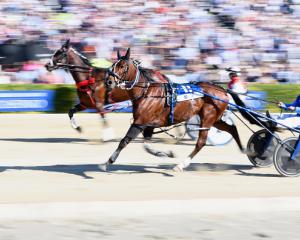