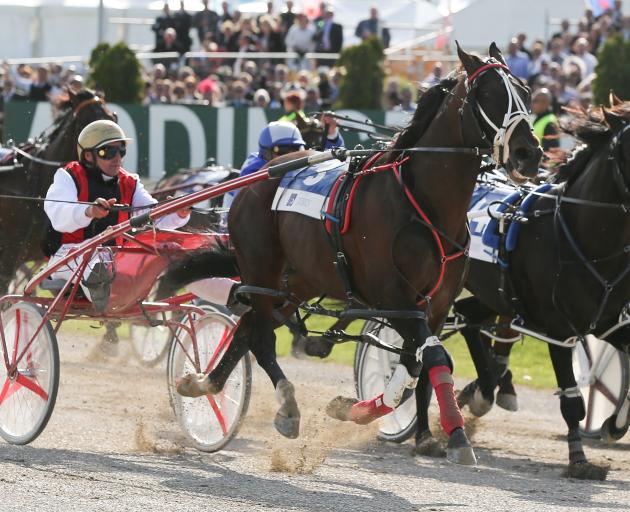 Ricky May drives Terror To Love #3 to win the NZ Trotting Cup during the NZ Trotting Cup at Addington Raceway on November 13, 2012 in Christchurch, New Zealand. (Photo by Martin Hunter/Getty Images)
With the country’s biggest day in harness racing on Tuesday we continue our Canterbury sporting icon series with a man who has driven his way to more New Zealand Trotting Cup wins at Addington than any other driver. Sport reporter Gordon Findlater caught up with Ricky May.

When the field lines up for Tuesday’s New Zealand Trotting Cup, Ricky May will be going for his eighth win.

However, it’s a four figure number which has the 61-year-old’s attention when it comes to achieving milestones. May currently has driven more than 2930 winners and hopes to reach 3000 in the next 12 months.

“I thought I could get it this year actually, but I haven’t really picked up the right rides lately. Hopefully they’ll come up,” said May.

“It’s a fantastic feeling all right. I don’t get too emotional about it, but everyone aspires to win a cup and I’ve been lucky enough to win seven. Sometimes you can’t see how you can win it and then all of a sudden it happens, like Terror to Love galloping away [in 2013] and coming back. That will never happen again,” he said.

Although Terror To Love’s remarkable effort of giving up 30m to the field in 2013 is arguably the greatest comeback by a horse to win the cup, the drive May rates at the best was his first win in 1989 with Inky Lord.

“He went amazing. He got knocked back at the 600, so to get up and win it was unbelievable,” he said.

Buried back in the pack, 12 lengths away from pacemaker Kylie’s Hero, Inky Lord appeared to lose all chance when Debbie’s Boy broke ahead of him after interference, and drifted back.

However, the gaps ahead had opened and Inky Lord produced one of the most explosive finishes ever seen in cup history to blast to the front just 5m from the finishing post.

May starting driving at 19 and came from a rich pedigree of harness racing. His father Terry May was a trainer and driver, while his grandfather Clarrie May also trained and drove - most notably with Loyal Nurse when it won the Auckland Cup in 1946.

May’s first race win in the late 1970s driving his grandmother’s horse Ruling River at a meet in Geraldine.

“Dad won the first race with her and then they let me drive and I went onto win eight races with her,” said May.

“I came in at a really tough era there were so many good drivers around, so I didn’t get many drives really. I just battled through and didn’t win a lot of races and never had a lot of drives.”

At the time May was also helping train with his father who had more than a dozen horses at the time. He says in the early days of his driving career he came through in an era which featured some of harness racing greatest drivers including the likes of Mike De Filippi, Colin De Filippi, Peter Jones, Maurice McKendry and Tony Herlihy. He says the racing was also more brutal than it is today with different rules.

“Today you just drive in lines, back then there was pushing and shoving all the time. You had to keep up or you got pushed out,” said May.

A race from the early days which sticks out to May wasn’t one he won, but involved a major crash on the back straight during a junior driver’s race in Greymouth.

“The one in front fell over and then almost the whole field went over. I managed to get through the rails and one of the other drivers – I can’t think who it was – came sailing in the air and landed in my dust sheet right in front me,” he said.

In total May has won more than 80 group one races. His highest winning stakes season came in 2009/10 with $2,031,564 and his only Drivers Premiership win came in the 2003/2004 season when he drove 105 winners. The greatest individual day for May came February 16, 1991 when he drove six winners at Addington. However, two titles which have somehow managed to elude him are the Inter Dominion and the New Zealand Derby.

May admits his driving days will likely wind down in the coming years. Outside of racing he runs an 80ha cropping farm in Methven.

Surprisingly none of his three children are involved in racing. His two sons own and operate a successful contracting business called May Brothers Contracting in Methven, while his daughter is a physiotherapist at Christchurch Hospital.

As for Tuesday’s cup, May believes it’s hard to look past anything from Mark Purdon’s All Stars stable which he says currently holds dominance unlike anything he’s seen in the racing industry previously.

“He’s got seven in it and they’re the first seven favourites in it. I don’t know what he’s going to end up racing, even The Fixer was looking good at Ashburton, he’s coming back,” said May.